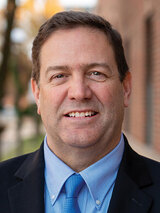 Michael LaFaive is the senior director of the Morey Fiscal Policy Initiative for the Mackinac Center for Public Policy, where he has worked since 1995.

He is the author or co-author of hundreds of essays, commentaries and blog posts and 12 studies on fiscal policy topics as varied as local and state privatization efforts, corporate welfare, school finance, state budgeting and cigarette taxes.

Among his studies is the Mackinac Center for Public Policy’s largest, a nearly 200-page state budget analysis that recommended more than 200 ideas for trimming some $2 billion from the state budget without cutting Medicaid or School Aid funding. Many ideas first presented by LaFaive in 2003 have been adopted or adapted by lawmakers in Lansing.

He is also the originator of the Center’s annual school privatization survey, which routinely garners a 100 percent response rates from districts. There is no database of competitive contracting like it in the United States. In addition to this product, LaFaive authored in 2001 a 26-page, full-color edition of Michigan Privatization Report specifically dedicated to fixing Detroit. The ideas in that publication are more relevant today than when it was published.

LaFaive is perhaps best known, however, for his cutting-edge, scholarly work examining state “economic development” programs. His studies and frequent commentaries on this topic have garnered him a national, if not international reputation as a respected government development critic and were probably influential in the decision to kill the Michigan Economic Growth Authority, the state’s high-profile corporate welfare program.

He has undergraduate and graduate degrees in economics from Central Michigan University.

LaFaive is married and resides in Traverse City, Michigan.

Back to the MEGA Future: Good Jobs for Michigan Reinvents Failed MEGA Program

What’s Old is New Again: Another Subsidy Program Being Considered by Legislature

An Empire of Smuggled Smokes

The Secrecy of 'Pure Michigan'

One State May Do Away With Taxpayer-Funded Tourism Promotion

The Cost of High Cigarette Taxes

Detroit’s Soccer Stadium Should Stand on its Own

Government Growth Proposed in Gov. Snyder's 2017 State of the State

State Not Transparent with Effectiveness of Multi-Million-Dollar Program

Recommended Reading: A New Look at “The Bet”

The State Claims ‘Pure Michigan’ is Worth Tens of Millions. It Isn’t.

Michigan and Ontario Governments Agree to Promote Crony Capitalism Together