Why Government Fails at Economic Development

(Editor's Note: The following is an edited version of a speech given by Michael LaFaive to the Florida chapter of Americans for Prosperity on June 8, 2017. Some of the language used here was taken from previously published remarks or essays.)

There are few areas of research where I find such widespread agreement in academic and other studies than those involving targeted “economic development” programs. In short, so-called development programs run by governments are ineffective and expensive. They don’t work, they’re unfair to those who pay full freight, cost billions of dollars that could be better used elsewhere and are potentially corrupting.

The modern “war between the states” over jobs has been active since the Great Depression. Fifty states run some 1,829 incentive programs designed to create jobs and wealth, according to the Council for Community and Economic Research, and economists have written hundreds and hundreds of studies trying to measure their effectiveness. 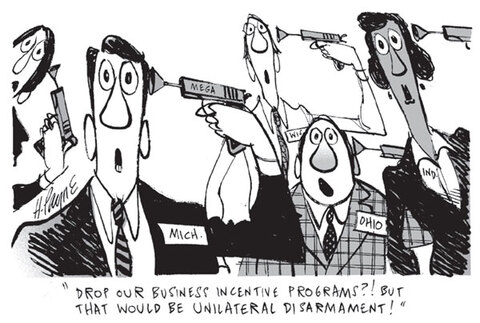 In 2004, some economists in Iowa did a meta-review of the economic development literature. That is, they looked at studies other people had made of the subject, how they conducted them, and what they found. The title of their review tells the tale: “The Failures of Economic Development Incentives.” The authors came to a significant conclusion: Any claim that government economic development programs improve economic growth or lead to positive fiscal benefits for the public treasury is probably false.

Since their study was released, I have found nothing in the professional or academic literature to suggest anything has changed. In fact, if anything, the frequency and clarity of published evidence against such programs has only increased. Here’s some of what we’ve learned recently about different economic development programs:

A 2008 literature review on sports stadiums, franchises and big events had this to say: “The evidence reveals a great deal of consistency among economists doing research in this area. That evidence is that sports subsidies cannot be justified on the grounds of local economic development, income growth or job creation.”

The record gets worse when you consider opportunity costs. That is, if billions of dollars weren’t spent trying to create economic development, might they be used more effectively through across-the-board tax cuts or infrastructure improvements? A 2000 tally by professor Kenny Thomas said the annual value of incentives offered reach as much as $50 billion. That’s a lot of money that could be redirected.

In all of my research, I’ve only encountered one paper — and from a consultant — that looked at the opportunity cost of a program from a broad-based perspective. If, instead of handing out a tax credit or subsidy, we made across-the-board tax cuts of the same amount, what would happen? In most instances, and for the biggest program examined, the net result would be more jobs with broad-based tax cuts. Yet none of the academic studies I’ve read attempt to factor in opportunity costs. Most of them still report zero to negative impacts, meaning that in real-world terms, they overestimate the (already meager) benefits of government-directed development programs.

Why do incentive programs fail? I suggest four big reasons.

First, government can’t give anyone something it doesn’t first take from someone else. I believe it was Frederick Bastiat who said, “Government is the great fiction through which everybody endeavors to live at the expense of everybody else.” Government doesn’t raise money for its subsidy programs by selling Girl Scout cookies. It gets it through confiscation of taxes. That money, left in the hands of the people who first earned it, would also create jobs and wealth if only its owners were allowed to dispose of it as they see fit.

Bureaucrats who run develop programs do not have profound skills at picking winners from losers in the marketplace to “invest” your confiscated dollars in a profit-maximizing way. To think otherwise, in the words of Friedrich Hayek, is the “fatal conceit” of economic planning. It is a folly stemming from conceit to think that a small group of planners can somehow grasp our economic lives, in all their nuances and details, and then reorganize them forcefully in a way that would be better off than if we had simply been left to our own devices.

Let me offer two examples to drive this point home. Forgive me if the first one, which I learned from economist Paul Romer, seems a little “wonky” but I promise it is worth your time.

Yet central planners like those at state economic development agencies are implicitly claiming that they can ponder all the possible combinations of outcomes. With that superhuman skill applied, they then confiscate our wealth, invest in some allegedly job creating entity and have the result be better than if had all been simply left alone.

Let me drive this point home with an example, though more of an extreme one. In 2010 the Michigan Economic Development Corporation saw fit to offer a $9.1 million subsidy to a company called RASCO, which promised to create 765 jobs over five years in Flint, Mich.

Keep in mind that state law mandates that the state jobs officials ensure “the plans for the expansion, retention, or location are economically sound.” But, as it turns out, RASCO was apparently invented from thin air from a rented single-wide trailer near Flint and the products it was said to offer may have never existed. But it gets better. The head of the company was actually a convicted felon out on parole. By the terms of his release, he was not even allowed to have a debit card.

This very state government that failed to catch this felon, we are told, is supposed to be able to pick winners and losers in the marketplace and ensure that the plans for the relocation of this alleged business were economically sound. Yet it did not even have the good sense to Google the CEO’s name, Richard Short. If the economic development officials had, they would have seen him profiled in a Flint Journal article about how hard it is for convicted felons to re-enter society.

Just for fun, can anyone here take a wild guess as to how felon Richard A. Short got caught? His parole officer saw him in press coverage of the deal. By the way, that coverage included a press conference with then-Gov. Jennifer Granholm, who unwittingly shared the stage with Short to announce the deal.

As a coda, I can’t help but point out that Short had at least one other scam going on. He apparently stole a pink poodle with a fake check from an employer he claimed as his own, but who had never actually employed him. He presented the check to a dog rescuer along with false power of attorney documents of the elderly dog owner, perhaps with the intention of reselling the poodle at a profit. He went so far as to perpetrate fraud. On a dog. I never learned what became of the dog.

Third, economic development programs encourage rent seeking (a growth retardant) and distort decision-making, turning some market entrepreneurs into political ones. Rent seeking is a fancy way of saying favor-seeking. It describes ways in which business and industry might collect higher “rents” than they otherwise might earn in the private marketplace by seeking subsidies, tax credits and abatements or protectionist tariffs of some sort. Research shows that states with high degrees of rent-seeking have slower rates of real economic growth as measured by state GDP.

Finally, the opportunity costs are high. Cutting taxes for a few politically well-connected firms makes it harder to cut taxes for everyone. By running these programs, states are effectively trying to feed sparrows through a horse. That is, instead of letting sparrows eat seeds of their own collection, the state takes it from them, feeds it to a bureaucratic horse and then forces those sparrows to pick through what comes out the other end for whatever seeds may have survived the journey.

As government analyses of state economic development programs go, the state of Florida runs an impressive shop. The analysts there at least try to measure the next-best alternative foregone, though they define that alternative as a basket of some other government goods, not a broad-based cut to some onerous tax, which they should do to put the true cost of these programs in proper perspective.

In my home state of Michigan, we had a film subsidy program and after its first year the state’s economic development department — the Michigan Economic Development Corporation — hired a contractor to measure the impact of the program. He declared it a big hit and produced lots of positive numbers. The Mackinac Center discovered the consultant left out 100 percent of the costs. Yes, all of them.

Years later, the department hired a different contractor to do an analysis, using the same computer model. This analyst included the cost and found the program to be a net loser. The program cost $500 million before the plug was pulled and apparently did more harm than good.

Most of the evidence — theoretical, empirical and anecdotal — do a little more than suggest that these programs don’t work. Politicians and other apologists for state and local incentive programs may squeal that “we can’t unilaterally disarm,” but in fact the programs were never armament in the first place. Ultimately, these programs are just expensive ribbon cutting ceremonies — or public relations cover — for politicians, funded by their constituents.

A better way to development is to take the “fair field and no favor” approach. People and markets were creating jobs and wealth long before government officials ever thought it should be their responsibility.