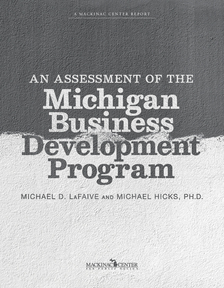 This study is available online at mackinac.org/s2018-02.

In 2011 newly elected Gov. Rick Snyder implemented bold reforms, which included killing the Michigan Economic Growth Authority program. This program gave out refundable tax credits — cash, in many instances — to a privileged few corporations, but by most estimates, it was ineffective, unfair and all too secretive.

Snyder at the time referred to such programs as the “heroin drip of state government.” Too many people and businesses were addicted to these handouts, he suggested. While putting MEGA down, however, the governor helped birth a replacement program that relied on cash handouts. It is called the “Michigan Business Development Program” and, like we did with MEGA before it, we have studied its impact on job creation and found it to be ineffective.

For every $500,000 in state funds actually disbursed to the selected companies, there was a corresponding loss of about 600 jobs.

The program is project-specific and provides outright grants, loans and other types of financial assistance in the name of job creation, investment, or both. Today 43 Michigan counties are home to at least one such deal. We wanted to measure the impact of the program, so we created a statistical model designed to isolate its effect on job creation in the counties in which projects are located. The model was informed with county level data on the workforce, which we obtained from the U.S. Census Bureau and from reports published by the state’s economic development agencies. The data set runs from 2012 through 2016.

Our model reports a slightly negative impact from the program. For every $500,000 in state funds actually disbursed to the selected companies, there was a corresponding loss of about 600 jobs. This finding does not surprise us; many academic and other economic development studies have and continue to show such programs to be ineffective. We describe studies of various programs, some of which share characteristics with Michigan’s MBDP, in our new work, “Michigan Business Development Program – A First Analysis.”

By our count, one of every third deal through fiscal 2016 either has been or is in some stage of default or dismissal. Not every instance of default or dismissal is problematic but many are. For example, one deal was dismissed simply because the company could not obtain a proper building. The deal was reconstituted later. On a more troubling note, the Michigan Strategic Fund and Michigan Economic Development Corporation told the Legislature last year that nine deals were revoked in fiscal 2016 — 8 because the company involved failed to meet a milestone or another requirement of its agreement.

The number of defaults and dismissals might actually be higher if the MSF weren’t so eager to grant amendments to companies that would eventually, and in some cases, already did, fail to live up to their agreements. The official report to the Legislature mentions 38 amendments to previous deals, and 28 of those seem to loosen some previously agreed-upon performance metric.

State officials insist that the MBDP is a winner and last year forecast a 10-to-1 return on investment for deals cut in fiscal 2016. The problem with projections is that the assumptions used to calculate them are often wrong. Many deals don’t pan out as expected. Also, officials wrongly presume that it was their subsidy or loan or other incentive that led companies to create these jobs. Recent evidence suggests that only a small number of investment decisions are influenced by fiscal favors from state and local governments.

In Snyder’s first run for governor, his campaign published a statement, “Rick for Michigan: Reform The Michigan Economic Development Corporation.” It read in part: “Incentive programs that do not add value to economic development or aren’t worth the cost should be discontinued.”

By that measure, our study shows that the MBDP should end, just like the MEGA program it replaced.