Ten years have passed since we took your bait 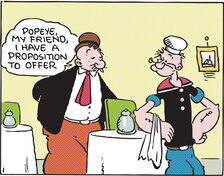 Mark Twain is alleged to have said, “I saw an unusual thing today; it was a politician with his hands in his own pockets.” With the start of the new fiscal year this week, voters should pause and reflect on the umpteenth time Lansing politicians reached deeper into taxpayers’ pockets.

It is the 10th anniversary of the 11.5 percent personal income tax hike imposed on Michiganders. It came with the promise that it was a temporary increase that would be rolled back when the economy got better. It was not. Taxpayers were betrayed. The full reduction never came and we are still owed a rollback to 3.9 percent, the rate of a decade ago.

It is never easy to be Charlie Brown to anyone’s Lucy. Having a football pulled away right before you kick it — despite assurances it would not be — is embarrassing. In this case, however, it is more than pride at stake, it is money families use to better their own lives. State government could not bear to tighten its belt any further in 2007, so it forced Michigan families and individuals to tighten their belt instead, and with a promise that turned out to be false.

To switch pop-culture metaphors to something predating Charlie Brown, the promise brings to mind Wimpy of Popeye fame. He was famous for saying, “I would gladly pay you Tuesday for a hamburger today.” In this case Wimpy was the state Legislature and Granholm administration and we fell for the Tuesday deal.

Taxes were raised from 3.9 percent to 4.35 percent and the promised “Tuesday” was the year 2011. That, according to the tax-hike law, is when the state would start reducing the rate, 0.1 percent per year until it reached 3.9 percent. After Rick Snyder was elected to succeed Jennifer Granholm, he allowed a single cut of 0.1 percent. He then scrapped future ones altogether. We are owed the remainder.

Early this year, Rep. Lee Chatfield, R-Levering, introduced legislation to finally roll back the burden of the tax increase and go one better. It calls for a full and immediate cut from today’s rate back down to 3.9 percent and then calls for a cut of 0.1 percent every year until the tax disappears. The proposal was watered down from the start, with a 2018 cut of 0.1 percent and another in 2019 of equal size. Further cuts would depend on the size of the state’s “rainy day fund.” Even in its diluted form, the legislation died because it lacked enough votes. Even lawmakers who campaigned on tax cuts would not support honoring the 2007 promise.

The best government is the smallest and most efficient government that can get the job done. … I have always believed that we can spend a little less than we receive. … I have worked to … [roll] back the income tax to 3.9 percent saving taxpayers $2.8 billion ... These are your tax dollars and it is critically important that elected officials remember that first and foremost.

This year, though, he voted against the tax cut, saying he could not support it because no spending cuts were being proposed at the time. Read his full explanation and examples of other lawmakers here.

To add insult to injury, 11 of 12 Republicans who voted down a modest tax cut for all taxpayers would vote in favor of at least one corporate welfare subsidy that benefited only a handful of wealthy developers. These votes show that some of our state representatives believe there is enough money to give to big businesses but not enough to let people keep more of their own earnings.

Wouldn’t it be nice if Lansing politicians just let all workers keep more of their own income taxes?

The case for keeping the promise is even stronger if you consider that Michigan’s economy is better than it was in 2007, which means the state budget can make room for cutting the tax rate. Michigan taxpayers are sending $6.9 billion more to Lansing today than they were just in 2010. That is a 27.3 percent increase in revenues, or twice the rate of inflation.

Lansing politicians still take too much from those who pay the bills of government. Adopting a tax cut now is the right thing to do. The economy is better. State government revenues are up. Taxpayers deserve to get what they were promised 10 long years ago.