Lawmakers May Further Subsidize Millionaires and Billionaires with New Program 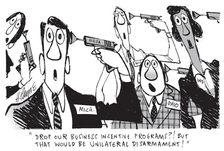 The “Good Jobs for Michigan” plan is yet another government scheme. Illustration by Henry Payne.

State lawmakers are once again rushing to embrace another program designed to benefit a few at the expense of the many. The new proposal is known colloquially as “Good Jobs for Michigan” but if history is any guide, it will produce few of note. It is a state “tax capture” program loosely modeled on the state’s failed multibillion dollar corporate welfare subsidy program known as MEGA, and it could be passed as early as this summer.

The proposal effectively allows well-connected corporations and others to keep tax dollars (based on new projects) that would have otherwise accrued to the government. It should not be adopted into law. It is unfair, may be justified by questionable economic analyses, doesn’t work and is expensive, too. Michigan’s jobs bureaucrats should just quit while they are behind. A better development tool is a fair field and no favors — tax cuts for all and not just a few big business owners selected by state politicians.

The new MEGA program, dubbed “Good Jobs for Michigan,” is as unfair, ineffective and as expensive as Michigan’s past, failed jobs programs.

Government — as many have long argued — has nothing to give anyone it hasn’t first taken from someone else. In order for legislators to give financial favors to big business they must first, directly or indirectly, reach into the pockets of small business owners and other taxpayers.

Robbing Peter to pay Paul is poor economics, especially because an expensive bureaucracy is necessary to run expensive corporate welfare programs. This program could cost $250 million for up to 10 years, for starters. In addition, Michigan’s jobs department is captained by one of the best-paid state employees in Michigan. Many other employees in the department are in the $100,000-plus range, money that would be best left in the hand of people who earn it, not friends of Lansing politicians.

The proposal’s authors have tried to give it some intellectual respectability by calling for a “regional” computer-based analysis. The computer model is supposed to assure that the tax capture scheme “will result in an overall positive fiscal impact to the state.” But this means nothing.

In truth, the bill mandates a facade of science be constructed to obscure the program’s costs and perhaps puff up its alleged benefits. The state’s hugely expensive and failed Michigan Economic Growth Authority subsidy program also required such analyses.

And those analyses, published by the program administrators, repeatedly found net positive benefits for handing out fiscal favors. Yet we now know that only about 2.3 percent of MEGA deals lived up to their expectations, meaning the computer analyses were wrong. The only thing they demonstrated was the inability of state bureaucrats and their consultants to accurately predict the future.

The failed MEGA program itself is a reason not to create a new MEGA program. Five academic-style studies have been performed of the old MEGA between 2005 and 2014. Four of them said MEGA had a zero-to-negative impact, despite the effort of billions in taxpayer dollars. The fifth found a positive impact, but it was small. If MEGA, a huge program, could not move Michigan’s job needle, it is unlikely that this new, smaller program will either.

Kansas tried a tax capture program called PEAK, or Promoting Employment Across Kansas, which was similar to Good Jobs for Michigan. When he studied PEAK in 2014, economist Nathan Jensen concluded that firms that had received special treatment were no more likely to create jobs than similar firms that did not receive an incentive.

Good Jobs for Michigan is officially capped at $250 million worth of deals. But this can easily be increased by the Legislature. Remember, the first MEGA program was sold as a narrowly tailored, rarely used incentive deal program, too. But it quickly expanded when it was politically convenient. Last year, the now defunct MEGA program cost the state treasury $1 billion, roughly equal to all the money generated by the state’s corporate income tax.

It should not strain credulity to think that a future governor might happily expand a new MEGA into something as unrecognizable and expensive as the original MEGA became over time.

The new MEGA program, dubbed “Good Jobs for Michigan,” is as unfair, ineffective and as expensive as Michigan’s past, failed jobs programs. It should not be adopted.