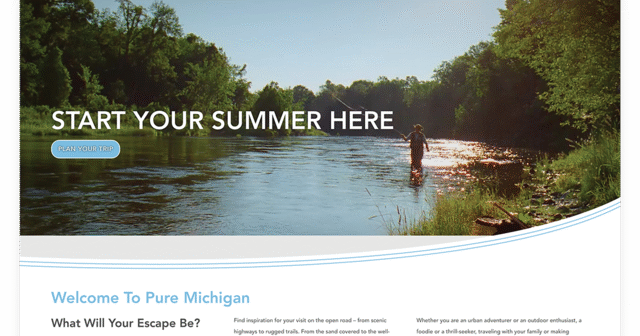 “Pure Michigan” produces some pleasing videos, but the state-run campaign to promote the tourism industry is costly and ineffective.
Publications / Viewpoints

Editor’s note: A version of this was originally published by the Lansing State Journal under the bylines of Jack McHugh and Michael LaFaive.

With the summer tourism season now underway, Michigan residents should consider this: The $34 million spent by politicians in Lansing to run tourism advertisements next year will be wasted. It is time to end this ineffective use of taxpayer money. Tourists already were vacationing in Michigan decades before state government created an official travel office.

We are comfortable labeling Pure Michigan “ineffective” because we have taken an exhaustive look at the program and found a huge negative return on investment.

For the uninitiated, the state subsidizes the tourism industry through a program called “Pure Michigan” that runs advertisements in out-of-state markets. The idea is that the ads will bring more tourists to Michigan and thus generate more income, opportunity and tax revenue than would exist otherwise.

The state claims that Pure Michigan generates more than $8 in tax revenue for every dollar “invested.” Our research suggests this is not the case, and there is increased skepticism among state lawmakers that Pure Michigan’s economic impact may not be as advertised.

The basis for the state’s claims of success comes from Longwoods International, a company that is paid at least $149,000 each year by the state. It’s worth pointing out that the company’s first contract and many subsequent ones were awarded on a no-bid basis. State documents show that the Michigan Economic Development Corporation seemed to assume Longwoods would give it numbers to help justify the Pure Michigan program. Longwoods itself once bragged of the “budget justification” aid it could provide to public agencies.

All of this might be tolerable if Longwoods were willing to precisely explain its methodology. But it refuses to do so on the grounds that it is proprietary. This secrecy should embarrass the MEDC, the state’s jobs department. It should embarrass anyone who knowingly relies on the unprovable assertions of a hired gun. This is particularly true when you consider that a staggering $329 million has already been spent or appropriated for this ineffective program.

We are comfortable labeling Pure Michigan “ineffective” because we have taken an exhaustive look at it and found a huge negative return on investment. You’d hope that an advertising campaign would at the very least recoup its costs. But we found that for every $1 million in spending to promote tourism, there was an increase of just $20,000 in extra economic activity for the state’s accommodations industry.

That is not $20,000 in additional tax revenue for the state, just extra business activity. We also looked at other sectors likely to benefit from such spending — recreation, entertainment and arts — and none fared any better.

To make this estimate, we created a statistical model that was filled with 39 years of data from 48 states. It was designed to isolate the impact of tourism-promotion spending from other factors that might affect a place’s attractiveness to tourists, such as weather, elevation, distance to large bodies of water and the economy. Unlike the state’s report, our study complies with all the traditional rules of scholarly research. The explanation of our model and its public data are 100 percent transparent, and the output was thoroughly peer-reviewed.

Not only is Pure Michigan ineffective, it is unfair to business owners who pay their own tax bill and their own advertising expenses. And if a state subsidy is good for one industry, why not others?

Pure Michigan’s funding was kept intact by the House in the fiscal 2018 budget approved May 2. Not all lawmakers, however, are completely sold on Pure Michigan, and some are starting to question the claims being made by Longwoods and the MEDC.

In April, Reps. Steven Johnson, R-Wayland; and Martin Howrylak, R-Troy, formally asked the state’s Auditor General to examine the Longwoods methodology or investigate the impact of Pure Michigan. On May 2, Rep. Henry Yanez, D-Sterling Heights, introduced an amendment to eliminate wholesale the $34 million set aside for it. The amendment failed on a voice vote, but we considered the attempt a sign of progress.

The program is a demonstrable failure. Until the state can transparently prove otherwise, it should be shut down.