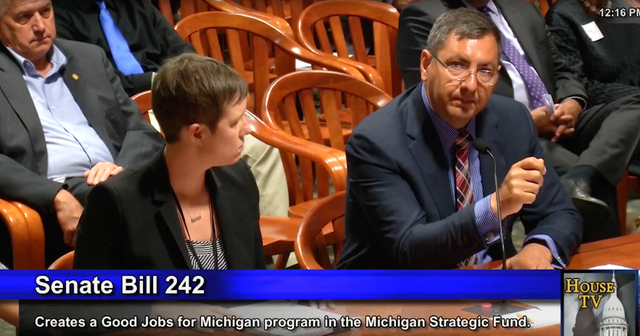 ‘But For’ Can’t Be Proved: Corporate Welfare is a Waste

New MEGA not costless, despite assurances

State lawmakers are considering a new package of legislation that would provide fiscal favors to companies selected by Lansing bureaucrats for special treatment. Among the arguments made in favor of the program is that it is costless because without the incentive the jobs wouldn’t be created in the first place. In other words, it’s performance-based.

This was the same argument sold to skeptical lawmakers and others for the failed Michigan Economic Growth Authority program. It was known as the “but for” argument: But for these incentives the company would not have located here, therefore, these deals are a net plus for Michigan. This is not exactly true and this is explained in the blog article, “MEGA Tax Credits Are Not Without Cost,” and elsewhere.

We have dubbed the proposed legislation “New MEGA” for the similarities it has with the original MEGA law.

The fact is apologists for these corporate welfare programs can’t prove a business moves to or expands in Michigan because of these incentives. They just rely on the assurances of executives in front of whom they have dangled millions of dollars.

At a June 14 hearing about the proposed New MEGA, the same “but for” arguments were made. Watch the video to see all of them or read the sample below:

State Sen. Jim Stamas, R-Midland: “This is not a MEGA. This does not take other taxpayer dollars and put it somewhere else. This is about collecting the dollars from the jobs that are actually created within it.”

He also said, “On top of that please write down, if there’s no jobs, there’s no money. No jobs equals no money for anybody making that investment.”

State Rep. Peter Lucido, R-Shelby Township: “The only money that’s gonna be out is only money that would come as a result of a new job. The job doesn’t fit the mold we didn’t lose anything did we?”

Derek Nofz, Southwest Michigan First: “It doesn’t take any current money. You have to create new jobs. It is only new revenue coming in.”

None of these men attempted to prove that incentives truly made the difference. By contrast, testimony from economist Tim Bartik of the Upjohn Institute suggested that by one measure, only 6 percent of “incented location decisions” are tipped by the incentive. Any money handed out to companies that would have expanded, relocated or invested in Michigan without the extra, special tax deals is likely just a waste of money, from the perspective of taxpayers.

One analysis of the old MEGA program found that deals from 2005 through 2011 only delivered about 2.3 percent of their promised job creation. Five studies of the MEGA program have been performed and four found a zero to negative impact. One found a positive effect. A study from Kansas about a program in that state with close characteristics to the New MEGA proposal showed that the program also did not create jobs.

Not a single proponent of this legislation presented scholarly evidence that New MEGA would actually work or perform better than its failed predecessors. It is just assumed that it will despite much evidence to the contrary. The proposal should not be adopted until its champions can prove otherwise.