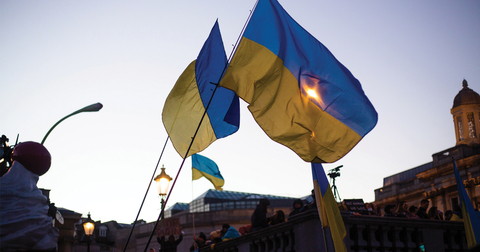 In May, I was privileged to deliver brief welcoming remarks to European think tank leaders and others from around the world in Warsaw, Poland. Originally, we were to have gathered in Kiev, Ukraine, in 2020 for the Atlas Network’s Europe Liberty Forum. The pandemic, lockdowns and a Russian invasion changed all that.

Some Ukrainians came and told their stories of the war. Many attendees from places not under attack ferried over enough non-lethal battlefield supplies to fill an SUV that would be driven across the border.

Ukraine had been on an upward trajectory (with setbacks along the way) since throwing off the Soviet Union’s yoke in 1991. It became safer to openly go about the business of think tankery — proposing reforms, exposing problems, challenging unethical officials.

Public policy wasn’t exactly a blank slate in the former Soviet republic, but independence — almost universally celebrated — brought with it a fresh start. My Ukrainian think tank friends identified plain old government corruption as perhaps the nation’s most pressing policy problem. Little else mattered, they said, if officials misused their offices, stole public funds and doled out favors to their cronies.

Progress was slow, but there was progress. Then Russia attacked and invaded on a scale far larger than its past transgressions in Georgia and Ukraine.

In Warsaw, Ukrainian think tank leader Natalya Melnyk summarized the cost of treating independence itself as a sufficient victory. “We fought for independence, we got it, and we quit,” she told the audience.

She now wishes her fellow countrymen had done more in their 31 years of independence to strengthen their institutions and the nation they uphold, to say nothing of stemming corruption. If Ukraine had been stronger — with an even greater commitment to rule of law, free-market economics and civil rights — she may have deterred the attackers altogether or quickly repulsed them.

We’ll never know for sure. No one should blame the victim in a war of unprovoked aggression, but serious challenges are better faced from strength than from weakness.

Michigan and America have big problems, too, but I tell Natalya’s story to underscore the importance of never giving up the effort to keep what we have and improve on it. It’s easy to be discouraged by focusing on headlines designed to frighten and disorient readers, in the search for views, click- throughs and subscriptions.

Ukrainians would likely trade some of their problems for ours. Ukrainian member of Parliament Maryan Zablotskyy, a friend of mine and former think tank president, even thinks it would be worth the trade-offs to import America’s “gun culture” (the very term he uses). He’s convinced that if Ukrainian civilians were as well armed as ours, there wouldn’t have been an invasion. (See his organization, Ukrainian Arsenal of Liberty, for more.)

We’ll never know if that’s right, but we can be pretty sure we’ll be better positioned to overcome Michigan’s, and America’s, problems if we preserve our strengths, double down on them and prepare for the unexpected.