A profile of Isaiah Bierbrauer, our Information Systems Developer 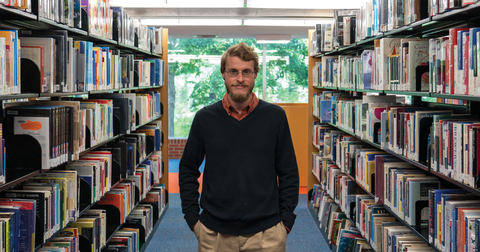 If you’ve ever visited Mackinac.org and noticed how quickly it loads, you have Isaiah Bierbrauer to thank.

Don’t be fooled by his youthful appearance. Isaiah has worked at the Mackinac Center for more than 15 years. He started as a part-time volunteer in 2007, and his willingness to help and learn quickly made a big impression.

Isaiah was invited to continue as a contractor soon afterward, and he now works full-time as an information systems developer. Working at the Mackinac Center was an easy choice.

“In the think tank world,” he says, “it’s one thing to have great ideals and another to actually accomplish them. Mackinac does both.”

In his current role, Isaiah oversees web development, manages databases and creates online tools for our employees. If you’ve been to any of Mackinac’s numerous websites, you’ve almost certainly experienced his handiwork. He was the driving force for the recent redesigns of both Mackinac.org and MichCapCon.com, ensuring that nothing went wrong during the transition between the old and new versions. Isaiah has a sharp eye for detail, making sure every pixel is perfect while ensuring Mackinac’s online presence works securely on both mobile and desktop platforms.

Isaiah doesn’t rest on his laurels though. “I love revisiting things I’ve made, reevaluating how they’re performing and improving on them,” he says. He carries with him a strong sense of ownership and responsibility, constantly thinking of ways to streamline tasks. Isaiah is most proud of his work on VoteSpotter, an app covering Michigan politics, which he built from the ground up.

Isaiah was born in Midland in July 1991 and has nine siblings. He grew up familiar with the Mackinac Center.

“Both of my parents worked at the Mackinac Center. My mother did mailings and later my dad joined as a janitor before transitioning to operations administrator.” They were both drawn to Mackinac’s philosophy of small government and wanted to help make a difference. Most importantly, they were all drawn to the atmosphere and people that the Center attracts. “I love my co-workers, they’re a great group of people and wonderful to work with.”