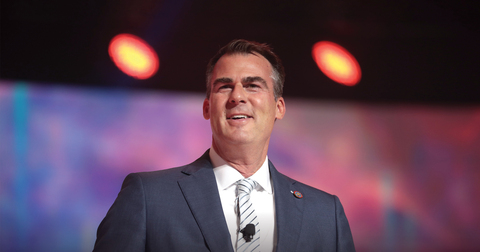 On Aug. 19, 2022, Oklahoma Gov. Kevin Stitt became the first governor in the nation to issue an executive order urging his state’s Board of Education to strengthen and protect the choices teachers have about whether to pay a union.

This action is a breakthrough for teachers and taxpayers in Oklahoma, who have watched state officials consider and fail to act on a key 2018 Supreme Court decision. In the case Janus v. AFSCME, the court was clear that teachers and other public employees in all 50 states have a First Amendment right to make informed decisions for themselves about union membership. A public employer may not withdraw payments to a union from any employee’s paycheck, it said, without that person’s explicit approval. States, however, have been slow to change the way they collect dues. This is true even in a state like Oklahoma, which enshrined right-to-work protections into its state constitution a little more two decades ago. It is time for the Oklahoma Board of Education to act on the governor’s executive order, which is a logical extension of the protections Janus offers.

Gov. Stitt’s action, which our organizations support and have recommended, is the first of what we hope will be many victories for Oklahoma teachers and taxpayers. It sets a high standard for other governors and public officials who claim to advocate teacher empowerment and employee freedom.

Gov. Stitt has urged the board to notify teachers:


The executive order also urges the board to give new employees a notice of these rights when they are hired.

Governor Stitt is the latest official to expand, protect and defend the First Amendment rights of public employees. Officials in the U.S. have filed legislation (ten states), issued executive orders (two states) or issued attorney general opinions (three states). State comptrollers have issued recommendations, and commissions have changed rules affecting public employees. Commissioners and secretaries of education have had a high level of engagement on this topic.

In the last two years, the Michigan Civil Service Commission and the Indiana Legislature changed public policies. They acted to ensure that teachers and other public employees are properly educated about their union rights. They also have ensured that these workers have complete control over union membership and dues payments. Indiana’s law just went into effect. A rule change enacted by the Michigan Civil Service Commission has been in effect for over a year, with a measurable and meaningful impact on employees’ exercise of their union opt-out rights.

In the decade before Michigan became a right-to-work state, about 5%-7% of Michigan state employees were union fee payers. They had chosen to refrain from union membership but were still compelled to pay a union as a condition of their employment. Michigan’s right-to-work law freed them from forced payments to the union, and the share of state employees opting out of union membership steadily increased — from just over 7% in 2013 to over 22% in 2020.

The Michigan Civil Service Commission went further in summer 2020 when it required all dues deductions to proceed on an opt-in basis, replacing the former opt-out standard. In just the first year of this policy, the share of state employees who refrained from paying union dues or fees jumped from just over 22% to just over 33%. Simply changing the default made a large difference.

The opt-in policy is important, because many public employees in Michigan, Oklahoma and other states are often unaware that a portion of their dues is sent to big national unions, like the National Education Association, for spending on progressive politics that may conflict with their own values and beliefs.

The Michigan experience suggests what policy changes might mean for employees nationwide. It is also why Gov. Stitt continues to urge the Oklahoma Legislature to finish the work it began in 2022, when the Senate passed opt-in reform, only to see it stall in the House.

As our organizations remain committed to the work in Oklahoma, we’re also encouraged by the progress and leadership other states are demonstrating. The momentum for greater employee freedom continues to mount. Indeed, in the four years since the Janus decision, leaders in other states — including Virginia, Tennessee, Alaska, Texas, Florida, Kansas, Louisiana, Pennsylvania, Kentucky and New Hampshire — have grappled with the court’s ruling. Some have considered what they should do to protect the First Amendment rights of their employees, and others have taken the next step, enacting safeguards.

We expect more progress for worker freedom as Gov. Stitt and others make this a banner issue for the rest of 2022 and into the next year.