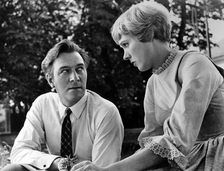 Christopher Plummer and Julie Andrews on location in Salzburg during the filming of The Sound of Music, 1964.

I love Julie Andrews. There, I said it. Mary Poppins and the Sound of Music are two of my favorite movies, and Julie Andrews is a big reason why. She made the characters she played compelling and memorable. Throughout the year, you may hear me humming or singing in my terrible impression of Fraulein Maria, “My Favorite Things,” especially around Christmastime. It’s not simply an anthem listing items that bring good feelings, but rather the savoring of life’s simple pleasures and not getting caught up in its speed.

So these are my favorite things about the liberty movement.

This may seem counterintuitive. After all, nonprofits don’t have the same pressures that for-profit businesses have, right? Not exactly. Organizations that do not recognize needs and fill them will not be effective, and may not stay in business. The Mackinac Center Legal Foundation and VoteSpotter are just two successful examples of recognizing a gap and filling it.

When asked what I enjoy most about working at the Mackinac Center, I often tell people that I get smarter every day by working next to smart people. Much like improving one’s athletic skills by playing in a more challenging sports league, I gain personal improvement from being around coworkers that challenge my assumptions and test various theories.

There’s a broad spectrum of personal beliefs among those who value free markets. Their social views may differ dramatically from each other, but there’s an agreement that personal responsibility and individual rights are better than government force; there’s a mutual respect of the person even if there is disagreement. The camaraderie among colleagues is refreshing, and it’s thrilling to see those freedom-fighters here and in other states gain victories for liberty.

For the most part, those who support the Mackinac Center are involved in their communities. They may serve on various boards, councils, commissions and charities, but they gain energy from serving other people. They believe that taking care of themselves and others is their responsibility — and they take it seriously.

I could go on for a long time about how wonderful this movement is, but I have only so much space and so many I-words I can think of. I hope you also can reflect on how precious liberty is and how vigorously it should be defended.