Now that Michigan is a right-to-work state, unionized workers can hold their union accountable by exercising their right to opt out of membership and paying agency fees, meaning they no longer have to fund a union to stay on the job. One reason employees might choose this option is if they believe their union is misspending their hard-earned dues money. But how could a union member determine if this were the case?

Financial information about private sector unions is easily obtainable, since the U.S. Department of Labor requires them to file annual financial disclosure reports. These reports are posted online, and unionized employees can see exactly how their union is spending their dues. 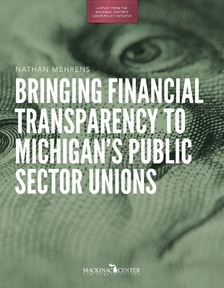 But it’s an entirely different story for public sector union members, because their unions are not required to disclose similar information. To shed light on the lack of accountability in government-employee unions, the Mackinac Center published “Bringing Financial Transparency to Michigan’s Public Sector Unions” in June 2015. Nathan Mehrens, a labor expert who helped implement the financial reporting requirements at the U.S. Department of Labor, authored the study. And later in October, the center hosted an event in Lansing with Mehrens as the featured speaker.

Mehrens explained that efforts to require unions to disclose their finances began in the 1950s and were spearheaded by both Robert F. Kennedy and John F. Kennedy. It was a bipartisan policy reform that was even supported by the president of the AFL-CIO, George Meany.

Mehrens described how easy it would be for Michigan to implement transparency requirements for its public sector unions: All the Legislature would need to do is copy the rules already in use by the U.S. Department of Labor.

All union members should have full access to financial information about the unions they choose to support. This will allow them to make informed decisions about their elected union officers and about whether they want to exercise their new opportunities under right-to-work.