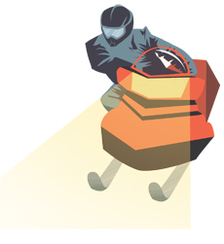 After weeks of deliberation, lawmakers unanimously tackled an issue that the Mackinac Center brought to the forefront, that of Michigan’s criminal justice system and its ambiguity about what constitutes a crime. A number of criminal statutes failed to define personal culpability and often the job was left to the courts, leaving the door wide open for inconsistency.

Consider the case of Kevin Willcome. In February 2015, the Ottawa County Sheriff’s Department charged him with the crime of driving a snowmobile with a suspended motor vehicle license. Willcome had no idea what he was doing was crime because Michigan does not require a license of any kind to drive a snowmobile. The law tying snowmobile use to a person’s motor vehicle license went into effect years after Willcome took a required safety class at the age of 12. Since that time, Willcome was an infrequent user of snowmobiles and had little reason to mine the Department of Natural Resources website for changes in snowmobile rules.

He hired an attorney and the prosecutor agreed to reduce the charge to a civil infraction, which was accepted by the court. Had Willcome been charged in another jurisdiction, the outcome could have been far different — he could have faced a large fine and even time in jail.

Michigan Supreme Court Justice Stephen Markman made note of statutes failing to define criminal culpability in another case, that of Alan Taylor, a Michigan business owner who was criminally charged for expanding his company’s parking lot into a wetland he didn’t recognize.

“Our Legislature might wish to take care in defining critical terms and elements with as much specificity as possible and in terms that are as accessible to ordinary citizens as possible so that they might readily understand what course of conduct it
is lawful, and unlawful to pursue.”

Two bills emerged this session to show that legislators were ready to do just that. Lawmakers were guided by two reports published by the Mackinac Center, “Criminal Minds: Defining Culpability in Michigan Criminal Law,” and “Overcriminalizing the Wolverine State: A Primer and Possible Reforms for Michigan.”

In the latter, Mackinac Center for Public Policy Executive Vice President Michael Reitz, along with coauthors James R. Copland and Isaac Gorodetski of the Manhattan Institute, examined Michigan’s penal code and noted it is significantly larger than that of its neighboring states and eight times larger than the Model Penal Code.
With that many criminal laws, they argue, it is essential that the state create a “default mens rea safeguard.”

“Mens rea” is the Latin term for culpable state of mind and one of two components, the authors point out, that should be specified in criminal statutes under legal tradition. The other is “actus reus,” the wrongful act itself. In Michigan, when there is no mention of criminal intent, the courts have no choice but to fall back on “strict liability,” meaning all a prosecutor needs to prove is that you committed a wrongful act, not whether you intended to do so.

The Michigan Senate and the House took two approaches in tackling criminal intent reform. State Sen. Mike Shirkey introduced SB 20, which created a default standard of “knowingly” if a criminal law failed to state culpability, and would apply only to new laws. House Bill 4713, introduced by State Rep. Edward McBroom, creates three defaults, “knowingly,” “purposely” or “recklessly,” and applies to bills old and new with some exceptions, such as those applying to the health, vehicle or penal codes. Under both bills, lawmakers would be free to incorporate strict liability into a law, but they would have to state so explicitly.

The Senate Judiciary Committee approved HB 4713 with some substitutes.

It added the exception of the Identity Theft Protection Act, and clarifies what happens when a criminal statute includes several elements but fails to spell out culpability for each one. State senators agreed to apply a default to existing laws but only those that are ambiguous. Additionally, the reform would not be retroactive, so past offenders would not be able to re-open their cases.

Getting to this point was no easy task. Prosecutors expressed concern about the impact and how it would apply to current laws. Proponents of reform pointed out support from notable law-and-order figures, such as Sen. Orrin Hatch of Utah and Ed Meese, who was U.S. attorney general for President Ronald Reagan. Reform, legislators were told, was also taking place in other states, particularly next door to Michigan, in Ohio.

In December 2014, Ohio passed what seems to be the most sweeping criminal intent reform in the country: If lawmakers fail to include criminal culpability language in any new act, the act would be void. For existing crimes, the reform enacted a ‘reckless’ default standard, meaning knowledge of the law would be immaterial if an offender acted in a reckless manner.

Ohio State Sen. Bill Seitz spearheaded the reform. An attorney, he was frustrated by the vague language he would frequently notice in Ohio laws. He uses the example of Ohio’s law on assault, which is a misdemeanor unless you strike a someone in a particular class, such as a nurse, judge or service animal.  The word ‘knowingly’ was stated in the laws but it was unclear what it modified.

“What if you didn’t know the person you hit was a nurse, for example? Then you’d be guilty of a felony,” he said.

Seitz says that as in Michigan, prosecutors in Ohio were resistant to criminal intent reform. It was only at the witching hour, shortly before the legislature ended its session, that prosecutors came around.  Similar to the Mackinac Center, Ohio’s Buckeye Institute became involved in the policy debate. Together they and others worked with a legislative sponsor to find some common ground with prosecutors.

For prosecutors in Ohio, the key issue was the definition of “reckless.”  Ohio’s legal definition contained the word “perverse” and it was something that would make prosecutors wince every time that word was stated in jury instructions.  Seitz said many jurors thought that it meant sexual deviancy and often struggled in deliberations.

As part of reform, lawmakers agreed to refine the definition of reckless to a manner that was satisfying to prosecutors. The bill was then passed.

On Dec. 22, Gov. Rick Snyder signed House Bill 4713, which is now Public Act 250 of 2015. The debate last year has shed light on what many considered an issue of justice and fairness. Criminal records can damage job prospects, chances for enlisting in the armed services, securing credit or enrolling in school.

Most Michigan citizens want to respect the law. If they are brought before a judge, the criminal offense should be very clear.