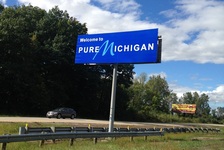 The Mackinac Center is scheduled to release its study, “Pure Michigan: State Promotion Generates Negative Return on Investment” in March. The early results were released last year and found that state promotion efforts do have a tiny, positive impact in one respect, but on balance remain a net negative for Michigan. The authors make a number of recommendations; chief among them is ending the program altogether.

The Pure Michigan campaign — which marks its 10th anniversary this year — is a taxpayer-funded effort to promote the Great Lake State. As part of its advertising effort it runs attractive television commercials featuring narration by Michigan-born actor Tim Allen. The idea behind the program is to spur more tourism in and to the state and thus encourage economic development. The program is operated by Travel Michigan, a government agency inside the state’s “jobs” department, otherwise known as the Michigan Economic Development Corporation.

To measure the impact that state-subsidized promotion has on the state’s economic fortunes, scholars Michael Hicks and Michael LaFaive built a statistical model around 39 years of data about spending by the 48 contiguous states to promote tourism. The model attempts to take into account other factors that might drive tourism spending. These include geographic features such as distances to a large body of water or mountains, as well as recessions, changes to population and trends in tourism.

Hicks and LaFaive found that every additional $1 million the state of Michigan spent on promoting tourism generated the state’s hotel and motel (accommodations) industry a miniscule amount of additional economic activity, or revenue. In fact, the benefit was so small that it is absolutely swamped by the cost of obtaining it. In other words, the cost of the program cannot justify the benefits. The Pure Michigan advertising campaign is even less impressive if one remembers that the money used to fund the campaign would likely have been spent more profitably had it been retained by taxpayers, or even used for a different public program such as road maintenance.

Unlike the official reports used to justify the Pure Michigan campaign, the Mackinac Center’s analysis is 100 percent transparent. The model will be explained in detail in the study’s appendix and its related dataset made available on the center’s website.