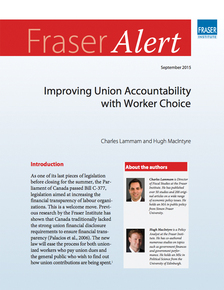 The Fraser Institute's study is available online at https://goo.gl/k2sO98.

Ideas from the Mackinac Center extend not only beyond Michigan and into other states but even into other countries, such as Canada. In September, the Vancouver, British Columbia-based Fraser Institute cited Mackinac Center experts and publications in a report on employment policy.

Earlier this year, Canada enacted a requirement that labor organizations account for the time and money they spend on lobbying and political action. As Fraser Institute authors Charles Lammam and Hugh MacIntyre explain, “Unions often spend money on political and other causes that are outside of the confines of their responsibilities in collective bargaining and with which dues-paying workers may not necessarily agree. Bill C-377 enables unionized workers to more readily determine how much of their dues are going to these causes.”

The second way to advance worker freedom, the Canadian think tank says, is to bring right-to-work to the country’s private sector unions. Drawing on the work of U.S.-based experts, including the Mackinac Center’s Michael LaFaive, Lammam and MacIntyre write that worker freedom fosters economic growth. They also mention F. Vincent Vernuccio’s report, “Worker's Choice,” when discussing the incentives unions face. The authors conclude that after ensuring union transparency, “The next step is to guarantee workers a choice about whether or not they wish to become a union member or pay union dues.”

The Fraser report also explains that under worker's choice, “Unions cannot take financial support from workers for granted and must continually convince workers of the value of having a union represent them.”

The report also cites work from Paul Kersey, a labor policy expert formerly with the Mackinac Center, and Dr. Michael J. Hicks, a member of the Center’s Board of Scholars.