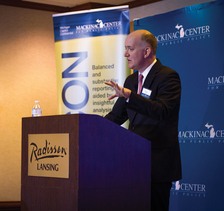 Dan Crane, a member of the Mackinac Center Board of Scholars, spoke at an Issues & Ideas forum in December.

In early December, the Mackinac Center hosted an event in Lansing featuring Dan Crane, the associate dean for faculty and research at the University of Michigan and a member of the Mackinac Center Board of Scholars. Crane has been an outspoken opponent of laws that prohibit Tesla and any other manufacturer from selling cars directly to consumers.

Addressing a packed room, Crane explained the history of automobile sales in Michigan, and how dealerships became mandatory. Organizations that represent auto dealers alleged that direct sales were unsafe and bad for consumers. Independent research, though, shows that allowing consumers to buy cars directly from the manufacturer brings down prices and has no impact on vehicle safety.

The concept of direct automobile sales isn’t just better for consumers, it is also supported by an array of groups across the political spectrum: Free marketers embrace open competition, environmentalists support making energy-efficient vehicles widely available and technology gurus appreciate the opportunity to revolutionize the auto industry. Organizations in favor of those ideas and more signed onto an open letter to policymakers in support of direct distribution.

The issue does not only concern Tesla Motors. This prohibition makes it impossible for any manufacturer to sell cars to individuals rather than dealers. Crane pointed to Elio Motors, another startup that hopes to market cars directly. With a base price of less than $7,000, the tiny, three-wheeled Elio has room for a driver and one passenger and can achieve 84 miles per gallon on the highway.

Unfortunately, when the Elio makes it to market next year, Michiganders will have to travel to neighboring states like Ohio to purchase one, as they must now do for a Tesla, unless the Legislature moves to end the dealership monopoly.