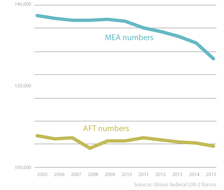 In March of 2013, Michigan’s right-to-work law went into effect and for the first time in decades, most government employees could no longer be forced to pay money to a union in order to keep their jobs.

The Mackinac Center has been educating workers about these new rights. School employees and private sector workers who favor the right-to-work law have also been reaching out to their colleagues, sending emails and writing articles. Over the past few years, thousands of workers have fled from the state’s largest teachers union, the Michigan Education Association.

In January of 2015, director of communications and public policy for the MEA, Nancy Knight, was quoted saying their membership decline was over.

“We feel that all of those members that intended to leave did leave,” Knight told the Detroit Free Press. “We do not anticipate a future decline in membership.”

In a yearly report filed with the federal government, it was revealed that the union lost another 13,300 members from 2014 to 2015.