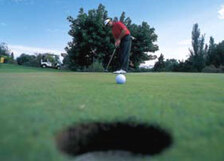 HUNTINGTON WOODS — The Detroit-owned Rackham golf course will be back on the auction block after an agreement with a potential buyer dissolved, according to The Detroit News. The city of Huntington Woods is now offering $4.91 million for its purchase.

Last year, Premium Golf LLC had offered to purchase the course for $6.25 million and promised an extra $5 million to the city if it could repeal a deed restriction that prevented the course from being developed into other uses, according to The News.

A competing bid came from Huntington Woods, which bid $6.25 million for the course.

Premium Golf pulled its bid before the sale was finalized and Detroit looked for new offers for the property, The News reported.

Huntington Woods lowered its bid after an appraisal pegged the value of the course at $4.91 million, according to The News.

Detroit has already sold one of its golf courses this year. The Greater Grace Temple purchased the Rogell Golf Course for $2.5 million, The News reported. A spokesman for Mayor Kwame Kilpatrick told The News, “We said, ‘OK, what’s our core mission? What do we do well at and what don’t we do well at?’ Running a golf course just isn’t part of the core mission.”