Book Review: Entrepreneurs show what is possible in education 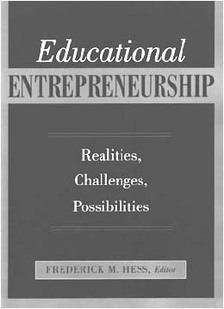 "Educational Entrepreneurship: Realities, Challenges, Possibilities," features conference papers presented at the American Enterprise Institute on Nov. 14, 2005. Revised and edited for publication, the essays serve as a lively discussion of the state of contemporary education and the means by which it may be bettered.

According to several of the volume’s 12 essays, the chief problem facing education is institutional inertia brought about by administrative bureaucracy, government over-regulation, faculty burnout and union protection of underperforming teachers. The majority of authors encourage entrepreneurship — the movement of economic resources from lower to higher productivity and greater yield, according to French economist J.B. Say — from without and intrapreneurship from within as means by which inertia may be overcome.

As examples, they cite the initial successes of the Edison Schools management enterprise; Teach for America, which places recent college graduates in inner-city teaching positions; and the Knowledge is Power Program, which operates open-enrollment college preparatory public schools for mostly low-income minority students.

In the book’s final essay, editor Frederick M. Hess makes the claim that "entrepreneurs can have an enormous impact on the education debates simply by providing visions of what is possible, and proof points that analysts and reformers can use in the course of public debate. TFA and the KIPP Academies, for instance, have fundamentally altered discussions about teacher recruitment and urban schooling and students."

"Educational Entrepreneurship" also presents points of view that vigorously defend the status quo. Larry Cuban, professor emeritus of education at Stanford University, asserts that entrepreneurship has accomplished little since the educational reforms of the early 20th century. Alex Molnar, professor of education policy and director of the Education Policy Studies Laboratory at Arizona State University, likewise presents a laundry list of the failures of certain charter schools and the corruption of some entrepreneurial programs as if these flaws were somehow endemic to any system that challenges the status quo. Molnar fails to balance his arguments with a much longer list of the myriad and far more egregious failings of our conventional public school system.

Hess, getting in the volume’s last words, counters: "Risk is the price of progress. Failed ideas, providers and schools are indeed a high price to pay. They are only worth paying when compared to the alternative, to the stagnation and the ceaseless, pointless tinkering that have for so long been the face of school reform."

Bruce Edward Walker is science editor at the Mackinac Center for Public Policy, and is co-author of "What Can You Do With a Major in Education? Real People. Real Jobs. Real Rewards," Wiley Publishing, 2005.