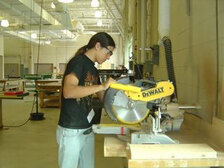 Estevan Rocha trims floor joists that will be used in a model home project at the Construction and Manufacturing Camp sponsored by Delta College and MITECH+. Camp participants use the college’s industrial arts equipment and classrooms. Rocha said he plans to take classes in building construction as a junior at Saginaw Heritage High School this fall.

Bill Moneypenny pulls out a piece of scrap paper and draws a bell curve, then splits the shape into three parts, two skinny and one fat. In this corner, he says, putting his ballpoint on the skinny area to the right, are the students who take Advanced Placement classes, join dual enrollment programs and get 4.0 grade point averages. Here, he continues, shifting the pen to the skinny category on the left, are the students who struggle through every class and will need help to find and keep a job. 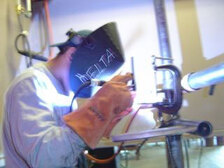 Todd Ross, a junior at Merrill High School in Saginaw County, uses welding equipment at Delta College as part of a skilled trades career camp sponsored by the college and MITECH+ this summer. Camp instructors include area teachers, college faculty and skilled-trades workers from area industry.

But it’s the students in the fat part of the bell curve — about 80 percent of all students, by Moneypenny’s estimate — who are going to become most of Michigan’s workforce in the next decade. He believes educators and business leaders alike need to pay more attention to them.

"We still take this bunch (the 80 percent in the middle of the curve) and shove them into the four-year college group," Moneypenny said.

Moneypenny is chief executive officer of MITECH+, a private, nonprofit corporation headquartered in Midland that advocates the value of technical careers. Founded in 2001, the organization works with business, industry, educators and families to spread information and organize projects related to technical careers, career training and career planning.

Students don’t need a four-year degree if they want to land a job as a chemical process operator at two nearby global companies — the Dow Chemical Co. and the Dow Corning Corp. Each company is looking for more than 100 operators annually "for the foreseeable future" to replace retiring workers, officials have said.

Hundreds of electricians, pipe fitters, welders and other skilled-trades workers will be needed shortly at Dow Corning’s Hemlock Semiconductor Corp., a silicon production facility where a $1 billion expansion was announced this year. Hundreds more will be needed if a proposal to build a coal-fired energy plant in Midland is approved. Those workers won’t need a four-year degree either, but all of them will need technical training in high school and beyond.

"There’s so much emphasis on college prep that sometimes I think the other side has suffered," said Anne M. DeBoer, executive director of the Dow Corning Foundation. Dow Corning executives were involved in MITECH+’s earliest stages, along with others from business, industry, education and economic development organizations. The Dow Corning Foundation and seven other Midland-area foundations provided start-up funding. Four of those provide ongoing support.

"It really was self-interest and survival," she explained the corporation’s interest in MITECH+. Dow Corning currently draws about one-third of its workforce from the Saginaw Valley area, and if it’s going to continue to do that, it needs to find students who took math and science in high school and are interested in a career in skilled trades.

"We need those kids in the workforce. We need them badly. The idea of MITECH+ is to bring a lot of these resources together," she said. "We’re in a global marketplace and people in this country need to understand that."

"They (future workers) won’t just need a strong back and a good work ethic. They need strong math skills and strong science skills," Moneypenny said. "Slowly, people are getting this, but in Michigan we’re way behind the curve."

At Dow Corning, the company needs students who took advanced math and science classes, have mechanical aptitude and a desire to do the work, said Brad House, the firm’s U.S. labor relations manager. A chemical process operator is responsible for supervising the mixing of raw materials into a finished chemical product, he explained. That includes timing the amount and order of mixing, adjusting temperatures and catalysts, doing laboratory tests on the finished product, reducing waste and suggesting improvements.

"Operators in our plants are in an extremely challenging role," he said. "We’ve got to get the word out that these are challenging and rewarding careers."

High wages are part of the reward, he and others pointed out. U.S. Census Bureau data shows that a skilled or technical tradesperson earned an average of $890 a week as of 2002, compared to $787 for a person with a bachelor’s degree, $606 for an associate degree and $474 for a high school graduate. People with master’s degrees earned an average of $969 a week, followed by those holding a doctoral or medical degree, at $1,269 and $1,468, respectively.

House’s job description as labor relations manager has expanded to include regular visits to high schools and career fairs to promote interest in the field as well as in the two-year chemical process degree program at nearby Delta College.

"It’s not often you see manufacturing set up booths at career fairs. We didn’t used to, but because of changes in the use of these skills, we need to recruit candidates," he said.

Corporations like Dow Corning can no longer afford the time, money or safety risk of training young employees on the job, he added.

"We used to interview for work ethic and attitude and then train them for skills. Now they have to have all three coming in."

Business and industry should make their needs and opportunities known by showing up at career fairs, sending employees into the classroom and inviting teachers into the workplace, Moneypenny said. But he added that educators and parents have a role to play in Michigan’s post-assembly line economy as well.

Chris Middleton of Bay City is an example. A polite, 13-year-old middle-school student with freckled cheeks, oversized sneakers and brown hair, he hasn’t chosen a career. But when he’s ready to decide, he’ll already know quite a bit about construction, welding and chemical processing as a participant in two summer camps.

One of those was a construction and manufacturing camp sponsored in July by MITECH+ and Delta College, with support from the Saginaw Valley chapter of Associated Builders and Contractors. Middleton and other middle school and high school students spent a week at the college getting hands-on experience in such areas as welding, computer-assisted design, carpentry and chemical processing, with guest teachers from the workforce.

The previous summer, Middleton said, he helped build a concrete block wall, put up framing, insulation and drywall in a model house, and helped install an electrical outlet and two switches as part of a construction camp cosponsored by MITECH+ and Associated Builders and Contractors.

"This creates the pipeline from middle school to high school to college to the workforce," said Darryl White, MITECH+ executive director.

Chris’ mother, Diane Middleton, said, "We’ve always told our kids, ‘You don’t have to go to college, but you have to further your education in some way after high school.’" She is employed with the Midland Area Chamber of Commerce, directing its Parternships for Education program, and her husband, Lance, is a journeyman electrician with the Michigan Sugar Co.

"For 13 years now I’ve been watching business and education interact," she said. "I’ve been able to see just how competitive it’s becoming. I don’t think it’s ever too early to think about what you want to do for the rest of your life."

In addition to the summer camp, MITECH+ also cosponsors a Career Showcase in which area businesses invite students, parents and teachers to spend an evening touring their facilities and learning about career possibilities. The organization also sponsors "Reality Store" in area middle schools, in which students spend time in advance exploring different career paths, and then choose a career for themselves. On the day of the program, the students are "given" one month’s income for their chosen career and sent out to shop for such things as housing, utilities, food and health care at different work stations hosted by volunteer adults.

One Reality Store participant who chose to be a disc jockey told Moneypenny that, "I learned I need to live close to the radio station, because I can’t afford a car."

Parents need to be open to skilled-trades careers as well, Moneypenny and others said.

"We have a lot of households that have one or two degrees held by the parents. There’s earning power in those degrees and they want that for their kids," said Clark Volz, superintendent of the Midland County Educational Service Agency. One MITECH+ study of 500 "heads of households" in Midland County showed that about 46 percent held a four-year degree or higher. Of those residing within Midland Public Schools boundaries, the number jumped to 65 percent.

In comparison, Census 2000 figures showed that about 21 percent of Americans age 25 or older held bachelor’s or master’s degrees, and 3 percent held a professional or doctoral degree.

Nobody in business or education wants to discourage students from going to a four-year university, he and the others said, but they also said they see too many university dropouts who might have been happier in an associate degree program.

Michigan school districts vary in the amount and type of career and technical education they offer. Some offer programs in their own high schools or jointly with other high schools, local colleges or businesses. In Midland, Volz said, schools work with area colleges, universities and businesses for programs in health care, information technology, chemical processing and cosmetology. Other school districts have their own career centers or send students to regional career centers administered through intermediate school districts. Thirty-one of Michigan’s 57 intermediate school districts levied a vocational-technical education millage in 2006.

"There are some that are always pushing the envelope," Volz said, "with work and knowledge welding together in one space."

That hands-on component pushes up the cost of career education, he added. "When you have hands-on, you have a safety component. The oversight piece is big. You can’t have 35 kids in a class with a single teacher."

High school programs can and should be responsive to workforce needs — within limits, Volz said.

"What I don’t think K-12 can do is reshape their school populations to accommodate momentary trends," he said. "Your child deserves some resiliency."

"We need to keep kids versatile and capable and to have competencies they’ll be able to use," he said. "I think there’s tremendous freedom for our kids if they have a broad range of skills."