‘A PLUS’ plan would permit states to opt out of NCLB

Other groups wrangle over ways to make law more flexible 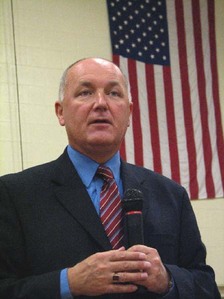 U.S. Rep. Pete Hoekstra has introduced legislation that he says would help restore local control of education by allowing states to opt out of the federal No Child Left Behind Act.

As Michigan educators testified before Congress this year on ways to improve No Child Left Behind, a Michigan congressman has proposed giving states the right to opt out of the federal act altogether.

Never an NCLB supporter, U.S. Rep. Pete Hoekstra has introduced legislation that he says would return more freedom and flexibility to states in determining how to spend federal funding for education. A Republican, Hoekstra represents Michigan’s 2nd Congressional district, which spans 11 counties along the central Lake Michigan shoreline.

As proposed, "Academic Partnerships Lead Us to Success," or A PLUS, would allow a state to submit a "declaration of intent" to the U.S. Department of Education under which the state agrees to take full responsibility for the education of its students. The state would continue to receive federal funding, but would not be subject to the requirements of NCLB and instead could spend the money according to its own educational priorities.

Accountability wouldn’t suffer, Hoekstra said, because states still would be required to establish their own assessment programs and report their progress. The difference is that local communities and parents would hold the schools accountable, not the federal government, he said.

"NCLB clearly has moved a lot of decisions away from the state, local communities and parents," he said. "Parents have come to feel they are irrelevant in the education of their children. The most important ingredient in determining whether a child will learn … has been exorcised out of the process."

Hoekstra introduced the bill as reauthorization hearings got under way for No Child Left Behind, first approved in 2001. In addition to Hoekstra, more than 50 other Republican House members are sponsoring the bill, HR 1539. Similar legislation has been introduced in the Senate by U.S. Sens. Jim DeMint, R-South Carolina, and John Cornyn, R-Texas.

In contrast, Michigan education officials who have testified at the reauthorization hearings have proposed ways to change the act, not to eliminate it. Those suggestions range from giving schools more credit for student progress over time to allowing states to define "qualified" teachers to giving students more than four years to graduate.

Hoekstra said he doesn’t believe NCLB has improved student performance, and that school districts have suffered under the "heavy hand of federal mandates," spending money according to federal priorities, not state initiatives.

"I came to the conclusion it wasn’t working. It wasn’t helping our kids get a great education," he said. His opinion didn’t change when the Center on Education Policy released a study in June showing that student achievement in reading and math has increased overall since the start of NCLB. Even the study’s authors noted that the gains could not be attributed directly to NCLB, Hoekstra said. The study said the improvement could also be due to such things as "teaching to the test," more lenient tests, scoring analyses or educational reform that was under way before NCLB.

Under Hoekstra’s plan, states could combine varied federal funding streams – such as Title I, intended to improve academic achievement among disadvantaged children, and Title II, for teacher quality programs – into one revenue stream and apply the money to state-set priorities. The only exception would be money funneled to states through the Individuals with Disabilities Education Act. That money would have to be spent on education for students with disabilities.


Asked about exempting those funds from A PLUS, Hoekstra said, "That’s one bridge too far."

Hoekstra said he will vote against reauthorization of NCLB, even in an improved format. That puts him at odds with President George Bush and other education officials, who have said they support the goals of the program but that it needs restructuring.

One is that NCLB use a "growth model" that would give schools credit for student improvement on assessment tests, instead of crediting schools only for student proficiency. Burroughs also said that the NEA believes "adequate yearly progress," the system under which districts must demonstrate progress toward target academic goals or face sanctions, should be based on more than statewide assessment tests. AYP should take into consideration graduation rates, school district assessments, attendance and the number of students who take advanced coursework, he said.

Also, schools should give newly arrived English language learners up to three years to master English before being tested in English in core content areas, the NEA suggests. Currently those students have one year. Many NCLB critics have pointed out that a school district’s overall performance can be heavily affected by subgroups within the district, including English-language learners and special needs populations.

Kathleen N. Straus, president of the Michigan State Board of Education, testified in June before the Subcommittee on Early Childhood, Elementary and Secondary Education, speaking on behalf of the State of Michigan as well as the National Association of State Boards of Education.

She told legislators that Michigan is meeting the spirit of the law, but "clearly we needed more flexibility to help our good faith efforts in meeting the letter of the law."

Like Burroughs, she said states should be allowed to adapt tests for students with limited English language skills and with disabilities; should be allowed to use a growth model to track achievement, and should defer to state procedures to determine qualified teachers, given the challenges of finding teachers in some rural areas or high-need subjects. Also, she said, some students should be allowed more than four years to graduate, including many in alternative education programs.

But, she said, "I want to make it abundantly clear that the Michigan State Board of Education … embrace(s) the philosophy and goals of the No Child Left Behind Act."

Hoekstra’s colleague, Rep. Tim Walberg, R-Tipton, met with educators in the Jackson area in May to promote the A PLUS plan.

"I think it attracted some interest," Superintendent John Graves said, but "nobody I’ve talked to gives it any chance" of approval. Graves is superintendent of the Jackson County Intermediate School District, which encompasses 12 conventional public school districts.

"We haven’t really resolved what parts of governance of education should be done at the local, state and federal level," Graves said. "Once we’ve had those debates, we’d have better guidance."

One complaint he’s heard about NCLB involves the four-year high school graduation requirement. Some students can finish high school in three years, he pointed out, and others need five.

"It’s a very strict four years, and I think that’s contrary to what we need to be doing. It’s locking in an old model at a time when education is in the process of redesigning itself."

Hoekstra said he believes such things should be up to states to decide.

"The bottom line is that we need to ask the question: Who will decide the future of our children’s education? Faceless bureaucrats in Washington, or parents and local school administrators who know our children’s names and needs? My vote is for local control," he said in a press release announcing A PLUS.

"My preference, in the long run, is to allow education tax credits," Hoekstra said. Under a tax credit system, individuals or corporations would receive a tax credit for money set aside for public or private education.

Hoekstra has the support of Tom Horne, the superintendent of instruction for the Arizona Department of Education, who said in a letter that the goals of A PLUS would be "vastly superior" to those of NCLB. The American Association of Christian Schools and the Home School Legal Defense Association also support the bill.