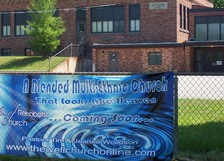 As this bright blue sign announces, the former Huff Elementary School in Grand Rapids has been sold to The Well Church.

One in Bridgeport. Seven in Royal Oak. Six in Grand Rapids. Eight in Lansing. More than 30 in Detroit. The numbers vary, but it is not uncommon to find empty school buildings for sale, for lease, recently sold or simply unused in many of Michigan conventional public school districts.

Downsizing drives many of the closures, as districts funnel fewer students into fewer buildings. Detroit Public Schools alone has announced plans to close more than 30 buildings over the next two years, adding them to a list of at least 20 buildings closed in previous years. Many of the buildings were operating at less than 50 percent capacity. In other cases, districts are shuttering old facilities and replacing them with new ones. 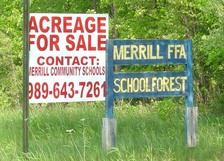 A number of conventional public school districts, large and small, have property for sale in Michigan. Merrill Community Schools put about 80 acres of wooded property on the market several years ago and has sold more than half of it. The area formerly was used for agriculture science classes.

What becomes of the empty buildings and property varies by location, and in many cases the surrounding community wants a say.

In Grand Rapids and Detroit, developers have converted school buildings into condominiums. Former Lansing School District buildings now house child care centers, a rescue mission and high-tech companies, with two schools still on the market. And Royal Oak Public Schools has sold several school buildings and adjoining property to developers who plan to demolish the buildings and replace them with housing developments. The district sees that as a way to bring in more families, hopefully with children who will attend Royal Oak schools.

"My business tends to pick up … when the economy in general is a little on the shaky side," said William Bowman, president of Great Northern Consulting Group in Ann Arbor. Bowman’s firm works with school districts to plan and carry out real estate sales. He’s worked on 10 to 15 school sales in southeast Michigan in the past two years, including Royal Oak. "We’re getting busier and busier."

Selling school property is a balancing act between getting a reasonable price on behalf of taxpayers and considering whether the planned use of the land is a good fit for the community, Bowman said.

"We’re not looking just to sell the property," he said. "I can tell you, if (school property) gets built up with a project that nobody’s happy with, guess who hears about that forever? … The goal is to get the use you want and the dollars you want."

In Royal Oak, a 50-member citizens group recommended the approach the district is now taking — to consolidate students into the district’s larger, newer buildings, then sell the remaining buildings to developers who would build single-family homes. The immediate benefit is cash from the sales, and the long-term potential benefit is more families with school-age children, Superintendent Thomas Moline said.

"The recommendation was to consolidate buildings to gain maximum efficiency," he said.

Royal Oak had 20,000 students 40 years ago, about 5,900 in 1998 and anticipates enrollment of 5,400 this fall. After the consolidation, the district will have one high school, one middle school and six elementary schools, down from two high schools, four junior highs and 18 elementary schools four decades ago. Some districts like to hold on to empty buildings in case of future growth, but Moline said projections show that’s not in the cards in Royal Oak. The district anticipates losing 200 additional students a year for the next several years. District capacity after the downsizing will stand at 6,000 students, he said, more than enough for the current enrollment and the new students the district hopes to attract.

Royal Oak sold one elementary site for $1.6 million in 2005, where 47 homes will be built, another for $2 million this year for a 55-home project, and it is now reviewing bids for two more sites where one developer wants to construct more homes and another wants to convert the schools to senior housing. In 2005, the district sold an elementary site to Beaumont Hospital for $6.1 million. Most of that property will be used for medical facilities, but a separate developer put in five homes as well.

Moline said the district moved toward a more aggressive sales plan after voters turned down two requests for bond issues for renovations in 2003 and early 2005. Those requests were for $99 million and $74 million, respectively. Voters then approved a $69.5 million bond request in late 2005, Moline said, but that won’t bring in enough money to cover the estimated $102 million in renovation costs.

"How do we bridge that gap? We get all the money we can out of the property we’re selling," he said.

Local media have reported that some area residents regret the loss of the playgrounds and park-like schoolyards, while others want the school buildings saved as historic sites. According to an article in Preservation Online, the online magazine of the National Trust for Historic Preservation, a grassroots group has gathered signatures on a petition calling for reuse of the schools.

But developers are primarily interested in the acreage at each site, not the buildings, Bowman said, because land is scarce in the "inner ring" of southeast Michigan.

"Within these urban areas, where can you create a little subdivision?" he asked. One school sale in Troy included 18 acres of land, he said. "Where can you get 50 lots in Troy? You can’t. … There are no large tracts of land that they can go out and buy. The process clearly works where there is a limited supply."

"There are a lot of things you can do paper-wise and engineering-wise to make a property more valuable," he said, among them drawing up engineering site plans, confirming zoning restrictions, removing underground storage tanks and handling asbestos removal or abatement. The investment pays off in higher bids from developers who won’t have to jump through those hoops, he said.

"The more questions you can answer for developers, the more aggressive they’re going to be," he said.

Moline isn’t expecting a large influx of students from the development projects.

Closing a building saves the district about $400,000 in operating expenses per year, he said, and renovations to the remaining buildings will make them more energy efficient and less expensive to maintain. The only increased operating cost in the future due to the renovations will be air conditioning, he said, and the district is installing that partly to make the facilities more attractive to community groups who want to rent the buildings after hours.

"If we have air-conditioned buildings, we could easily generate enough (rental) income to offset the air conditioning costs," Moline said. Royal Oak took in $400,000 in rental income this year, he said, but the money isn’t the only benefit of bringing people into the schools.

Only 16 percent of the households in the district send a child to Royal Oak Public Schools, Moline said, but allowing the community to use school facilities gives non-parents a link to the district.

Selling a school building is often a controversial matter. In Royal Oak, the question of historic preservation became an issue. In Grand Rapids, the board of education voted to sell five acres of land to an individual who wanted to build a home there, although neighbors said the district should either retain the land as green space or rent it to a Little League organization for $1 a year, according to the Grand Rapids Press. The land is part of a larger parcel which includes a park and elementary school, and was provided to the district in the 1950s under a deed restriction that required it be used for educational or recreational purposes for 50 years. Board members who supported the sale said the district had promised voters to sell excess property when it used general fund money for school improvements in the 1990s.

"There seems to be a market for it," he said. "Location is important."

One former educational facility is now being used for mini-storage, he said, and another was purchased by Goodwill Industries for adult training programs. One better-known project is Union Square Condos. Formerly a high school, the building now houses more than 100 condominiums, some of them featuring vintage school fixtures like lockers and chalkboards.

The Lansing School District has sold five of eight vacant school buildings since spring of 2006, according to the Lansing State Journal, bringing in nearly $1.5 million, and two more schools are on the market. The district recently received an offer from a group of Michigan State University staffers who want to lease a former school for $1 a year, with an option to buy. The group wants to use the site as a technology center to spur research and entrepreneurship in the area.

One thing many conventional school districts do not do is sell their unused property to charter schools. (See related story, ‘Finding, financing a school building still a challenge to charters").

Smaller districts have buildings and property for sale as well. Merrill Community Schools put 80 acres of wooded property up for sale at $3,000 an acre and has sold 45 acres so far, according to Superintendent John Searles. Years ago the site was used by agriculture science students, but the district doesn’t offer those classes any more.

"The amount of time I’ve spent trying to sell this has been surprising," Searles said. The district has turned down half a dozen offers that didn’t meet the asking price, and two other bids fell through when the purchasers couldn’t arrange financing.

"There are oil developers in that area prospecting for mineral rights," he said, but, after a bad experience with natural gas wells in earlier years, district officials have decided against allowing oil drilling on the site. Slant drilling would be an exception, Searles said.

Money from the partial sales was spent on infrastructure, including $60,000 in computer upgrades, he said. "The trickling in of money has allowed us to continue to add programming."