Contracting: How schools can optimize cost and quality 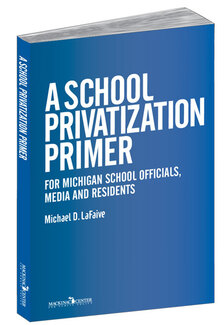 The number of public school districts in Michigan that hire companies to provide custodial, transportation and food services is on the rise, and a new book from the Mackinac Center for Public Policy explains how the process works and how schools can gain the benefits and avoid the pitfalls of competitive contracting.

"A School Privatization Primer" describes the frequency of privatization in Michigan and nationwide, details the contracting process and offers "rules of thumb" for school districts new to this management practice. The author is Michael D. LaFaive, the Mackinac Center’s director of fiscal policy. The Mackinac Center also publishes Michigan Education Report.

"Knowledge about competitive contracting is hard to find in a central source that is focused on the needs of schools, specifically schools in Michigan," LaFaive said about the primer’s purpose. "But the goal isn’t just saving money and improving services – it’s freeing district officials to focus on helping teachers in the classroom."

The primer is the third and final book in the Mackinac Center’s Michigan School Management Series; the companion publications discuss collective bargaining and school finance.

The Michigan figures are based on the Mackinac Center’s own statewide surveys on school privatization, which show consistent growth in the practice from 2001 through 2006. Numbers from the 2007 survey were not complete at the time of the primer’s publication or publication of this issue of Michigan Education Report.

Two factors that lead most districts to consider privatization are a desire to focus on education and the potential cost savings, according to LaFaive.

Cost savings are one reason Jackson Public Schools has extended its contract with Enviro-Clean Services through the 2009-2010 school year, according to William Hannon, deputy superintendent of finance. The district’s positive experience with that firm influenced it to also contract with Professional Educational Services Group to dispatch its substitute teachers, Hannon said.

"It’s going well. I would recommend it," Hannon told Michigan Education Report. The district has two contracts with Enviro-Clean, one for custodial and minor maintenance services and the other for four grounds positions.

"The price has not gone up since the first year we contracted with them," he said. The district saves approximately $1.2 million per year through the contract. With enrollment at approximately 6,600, the savings equals $181 per student.

Other districts, among them Howell, Northville and Dowagiac, have said they are considering contracting for support services for the first time, primarily because of potential cost savings.

Privatization efforts can be controversial, and sometimes fail, the primer notes, but school districts officials can expect a better experience if they understand in advance the contracting process and the arguments — often raised by employee unions — against privatization.

For example, LaFaive suggests that school districts take full advantage of the "Request for Proposal," a written document inviting bids from vendors which should spell out the services a district expects and the criteria a vendor must meet. Here the district can establish its expectations for quality, oversight, employee training, licensing and more.

"The heart and soul of a contract arrangement in the public sector and the private sector is the RFP," LaFaive said. "The number one pitfall is not getting it right the first time, because it gives a good management tool a bad name while causing pain to district employees and other members of the community."

When Jackson first investigated privatization, it reviewed the RFPs used by other districts.

"There’s no need to reinvent the wheel," Hannon said. "We just tailored it to the needs of our district."

The goal of the bidding process is not to seek the lowest possible price from a vendor, but to obtain a high quality of service as well as a competitive price, the primer explains.

"Passions will also run high at board meetings," the primer notes. "Shouts, catcalls and angry language are common, and the meetings are made more uncomfortable by the larger turnout and the probable presence of reporters and television cameras."

Privatization critics often allege that companies hire unqualified workers who will pose a danger to school children. The primer responds to arguments along those lines, noting that most private vendors have an incentive to hire employees already employed by the district who have knowledge of the job, while having no incentive to hire a worker who would damage the company’s reputation by putting a child at risk.

Some school districts ask vendors to give preference to current employees when hiring new staff, and districts also can establish personnel qualifications as a condition of the contract.

Another accusation frequently leveled at districts considering contracting is that vendors pay lower wages than the district pays. Those charges should be challenged with a comparative analysis, the primer suggests, adding that vendors’ wages are frequently comparable. There may be a difference in benefits, however. A key reason vendors can provide services at lower cost than the district itself is that the company’s employees are not public employees, and so the vendor is not required to contribute to the state employee retirement system. Those savings can be passed on to school districts. Another reason is the economy of scale that large transportation, food service and custodial companies can bring to bear on purchasing.