A charter challenge: Finding an affordable building can be a hurdle 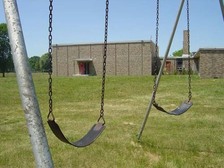 Sabis Educational Services has signed a purchase agreement to buy the former Kaufman Elementary School building and grounds, shown here, from Bridgeport-Spaulding Community Schools. Sabis plans to open the International Academy of Saginaw, a public charter school, at the site.

Finding and financing a school building continue to be among the main challenges facing new charter public schools in Michigan, but experts say those with a proven track record are now attracting interest from financial investors.

Locating a place for a new charter school is difficult because of the expense and the building requirements. Conventional public school districts may levy a tax to raise money for new buildings or renovations; charter schools cannot. Instead, charters use part of the per-pupil aid they receive from the state, or privately raised funds, to pay for facilities.

While some charter start-ups are backed by management companies that pay for buildings up front, many new charters can’t afford to build or purchase a building immediately, and lenders are less likely to provide money to a school that has yet to prove itself. Even if the seed money is in place, not all buildings are suitable for use as schools, and some conventional public school districts have said they will not sell or lease their unused buildings to charter operators.

The cumulative effect is that charters call a wide range of facilities "home" as they look for affordable and suitable spots, according to a report issued jointly by the Michigan Council of Charter School Authorizers and Charter FS Corp., a financial consulting firm.

Charters are found in storefronts, modular facilities, former industrial buildings and former private or parochial schools, according to Christine Smiggen, vice president of Charter FS. Many of them open under lease-to-own agreements that let the school build a track record it can show to investors when it’s time to purchase the building.

"New charter schools really need to start in a leased facility," Smiggen said. "They can’t build. It’s really hard for them to borrow up front like that."

"Our experience is that new charter schools can’t build their own building. … They have no financial track record, no credit. They almost have to rent," agreed John Romine, president of The Romine Group, an education service provider. The company currently manages five charter schools in Michigan, but has worked with 18 schools over the years and helped a dozen of those find facilities.

Smiggen and Romine both said that charters that stay the course — those whose contracts are renewed by their respective authorizers and show stable enrollment — are beginning to attract financial investors who see the schools as a viable investment.

The U.S. Department of Education has also entered the scene, recently announcing a $6.5 million grant for the Michigan Public Educational Facilities Authority through the federal Credit Enhancement for Charter Schools Facilities program. The grants are designed to help charter schools increase credit worthiness and help them obtain facilities funding.

"Charter schools are one of the fastest-growing sources of school choice in American education today, but many can’t obtain financing for the facilities they need to house their schools," Secretary of Education Margaret Spellings said in announcing the grant. "These grants will help communities open up new spaces to charter schools so that, in turn, these schools can open their doors to new students."

In some of the state’s largest urban areas, charter organizers can’t look to conventional public school districts for school sites. Even though a number of districts have buildings for sale (See ‘School for sale,’ this issue), at least two large districts have said publicly that they will not sell or lease their buildings to a charter organization or to a third party acting on behalf of a charter.

Detroit Public Schools plans to close more than 30 buildings this year and next, but the Detroit Free Press reported that the board of education adopted a resolution not to make the buildings available to charter operators. The Lansing School District, which has put eight vacant school buildings on the market since spring of 2006, said it would not sell one of its empty elementary schools to the Mid-Michigan Leadership Academy, a charter school that was renting space at the nearby state-owned Michigan School for the Blind.

Lansing Board of Education member Hugh Clarke Jr. was asked by local media about selling property to a charter operation. He was quoted as saying, "From an ideological standpoint, it might be difficult for me to swallow. … That’s almost like cutting off your nose to spite your face."

The Academy later purchased about eight acres at the School for the Blind site from the state.

"It’s been the law for 11 years, but people know how to get around it," said Leonard Wolfe, an attorney who helped develop the language. Wolfe, a former Michigan Senate staffer and clerk in the executive branch’s legal division under former Gov. John Engler, is now an attorney in Lansing. The law doesn’t require conventional school districts to sell their property to charters, he said, but is supposed to prevent them from putting advance restrictions on such sales.

"It’s been a horrible situation," Romine said. In one case, he said, a conventional public district put a building up for sale, then took it off the market after a charter school showed interest.

"They took the for-sale sign down," he said, until the charter organizers found a different site.

In general, new charter operators like to buy existing schools because they require less renovation to meet school code requirements and are located in residential neighborhoods. But Sabis Educational Systems Inc., an international company with 31 private and charter schools, has converted various types of buildings to educational facilities, according to Jose Afonso, director of the board and governmental affairs.

"It was so cheap for us to do that," he said. The facility now houses 700 students and cost $12 million to purchase and renovate.

As an exception to most districts refusing to sell to charter operators, Sabis recently signed a purchase agreement to buy a former elementary school from Bridgeport-Spaulding Community Schools for $150,000 as the site for its new International Academy of Saginaw. The school will be the company’s second Michigan site; the first is the International Academy of Flint.

Before bidding on Kaufman Elementary School, Sabis considered putting in a bid on a two-story, 109,000-square-foot site in downtown Saginaw. They dropped the plan because there was no room for parking or a playground, "unless we used the roof, which we thought about," Afonso said.

Afonso, who formerly worked in the Massachusetts Department of Education, believes conventional school districts are shortsighted in declining bids from charter schools and that their time would be better spent improving their own operations.

"Charter schools are here to stay," he said. "This kind of opposition is an awful waste of time and energy and money. Very, very few charters have been stopped by a district’s intransigence on charter schools. Charter schools are created by people who are determined to provide choice. They will find a way."

But conventional school districts have a responsibility to consider the financial impact that selling their property will have on their operation, said William Bowman, president of the Great Northern Consulting Group. Bowman’s firm works with school districts to plan and carry out real estate sales. Bowman said that it doesn’t necessarily make economic sense to sell property to a competitor, whether charter or private.

His company advises schools to put out requests for proposals for the purchase of school property and then determine the "net economic value" of each offer. That includes projecting how many students are likely to leave the conventional school district and attend the new school. Each student who switches schools represents a loss in state aid to the host district, he said.

If a conventional district receives three offers for a building, he said, one from a competing school, one from a project that would have no effect on school enrollment and one that would boost the conventional district’s enrollment, then "purchase price is only one thing they’re going to take into consideration." Royal Oak Public Schools, for example, has sold most of its elementary sites to housing developers.

Bridgeport-Spaulding put Kaufman Elementary on the market as part of a consolidation strategy, Superintendent Desmon Daniel said. In recent years the school had been used for a day care program and as an alternative education site.

"We had some extensive discussions" about selling to a charter operation, he said. The board of education voted 3-2 in May to move ahead with the purchase agreement.

"We have high-quality teachers and we believe our teachers do a more than competent job at educating our stakeholders — the students of this district," he said.

Another group — financial investors — "are finally realizing that charters are here to stay," Romine said. Charter schools that find suitable facilities and that show stable enrollment, fiscal responsibility and the trust of their authorizers are attracting attention in the bond market and from some lending institutions, added Smiggen, of Charter FS.

"There are more players coming into the marketplace," she said. Two years ago, when Charter FS looked for underwriters for academies interested in selling bonds, there was only one active investor, she said. This year, the firm’s latest request for proposals brought in 10 possible buyers.

"That’s a significant difference," she said. "Bankers by nature are risk-averse and nobody wants to be the first one," but now they realize, "Hey, this is a pretty good place to make money."

In Big Rapids, Crossroads Academy got its start by purchasing an empty building from Big Rapids Public Schools, according to former superintendent Dave VanderGoot. The 1928 facility had been used over the years as a high school and a middle school, but was left empty after Big Rapids built a new high school.

Crossroads opened with approximately 330 students in kindergarten through eighth-grade and today has nearly 700 in kindergarten through twelfth-grade. When they outgrew their building, they decided to build a new high school in two phases, VanderGoot said, first building nine classrooms and an office complex and, in the second phase, nine more classrooms and a gymnasium.

"We built by borrowing from a local bank," he said. "They watched our growth. … Suddenly you have people willing to spend on charter schools."

Because they pay for facilities out of their general operating budgets, not sinking funds or debt millage levies, charters look for less-expensive options, Smiggen said. They might build over time, design multi-use rooms or go without media centers or gymnasiums.

In response to a challenge to build a school at half the normal cost, Bouma Construction has developed a model for charter school construction that it says saves money by using standardized products, design and construction methods. According to its Web site, the Grand Rapids-based company has been involved in 35 school construction or renovation projects, with an additional 10 in progress.

"They (charter schools) have got to make that foundation allowance stretch much further," Smiggen said. "They understand that and the parents understand that. I’m always amazed at some of these charter schools that have huge waiting lists and there’s nothing special about the building."