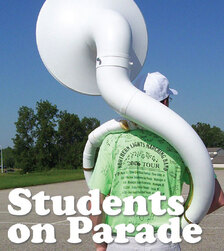 Luke March, tuba player, heads toward the practice field at the Home School Building in Wyoming, where The Northern Lights Marching Band meets on Wednesdays. March is wearing a souvenir T-shirt from the band’s 2006 parade season.

Wendy March’s first band class numbered 43 students. The next year, 100 more wanted to join. Nobody was more surprised than the Belding home-school mother herself.

"I never would have thought it would turn into this," she said, eyes on the group of students marching in parade formation around a parking lot in Wyoming. "It met a need in West Michigan we didn’t even know existed."

The single band class that March initiated in 1996 has grown into the West Michigan Homeschool Fine Arts program, encompassing beginning, intermediate and advanced band and orchestra, a marching band, choir and chorale, and varied music classes, together attracting some 500 home-school students each year. March, 48, a mother of six, continues to teach beginning and intermediate band, with a dozen other instructors teaching other classes.

During the school year the students meet regularly at The Home School Building in Wyoming, a multipurpose facility that includes classrooms, a gymnasium, library and bookstore. During the summer months, the focus is on the Northern Lights Home School Marching Band, a group of more than 100 elementary to high school students that performs in half a dozen Michigan parades each summer.

March’s oldest sons were ages 9 and 8, respectively, when she began looking for a way for them to participate in a band. A longtime choir director, she holds a bachelor’s degree in secondary music education and at the time held a Michigan teaching certificate. But credentials aside, March remembered how much she had enjoyed playing trumpet in the New Hanover High School band in North Carolina, and she wanted that experience for her children.

"I saw that music attracted the cream-of-the-crop kids," she said. When her husband suggested she start a band herself, March was willing, but not sure how much response she would get.

"I didn’t think too many would want to come out of the woodwork," she said. Still, she put the word out through home-school groups and found not only parents who wanted their children to join, but parents who eventually would volunteer to help by bringing refreshments, coordinating equipment fund-raisers, organizing uniform orders and sales, and supervising a banner corps for children too young to join the band.

"Parents want this so badly, they’re willing to give up their time," she said. By the second season, March had asked Robert Stiles, a retired school band director who lives in Belding, for help.

"He loved it and he’s been coming ever since. What brought him out of retirement was the attitude of the kids. So eager to learn. They wanted to be there," she said.

Students join the advanced bands through audition and are allowed to stay based on performance. There is a fee to participate in band classes, and while some families purchase their own instruments, the Fine Arts program purchases some as well.

"To stay in the program they have to practice," she continued. "We believe in accountability and responsibility. They learn that some places require a uniform and that you’re part of a team. It’s not a one-man job."

The Gravelle children – ages 17, 16, 13, 10, and 8 – joined the band program this year, traveling about 30 minutes each way from their Ada home to the Home School Building.

"It was a little intimidating at first, but the kids jumped right in. We all fell in love with it within the first few months," said Shelly Gravelle, their mother. Four of the children played in the beginning band during the school year and five are in marching band, one as a banner carrier. "They had tinkered a little with the piano, but they had never played instruments. I’m amazed at the progress they’ve made in one year."

Now the Gravelle family constitutes most of a brass section, with one child each on tuba, baritone, trombone and saxophone.

"There is a very high standard," Gravelle said. "If they do not practice, you will hear about it as a parent."

That emphasis on excellence was one of the things that attracted the Zuidema family, also of Ada, but not the only thing.

"It’s not just a competition. It’s about loving each other as well," Michele Zuidema said. The Zuidemas have six children. Of the five that have participated in band programs so far, two have physical disabilities. Ana, 10, has no legs and shortened arms, her mother explained, and was on the verge of dropping out of the program this year due to a series of health problems.

"She was in tears," Zuidema said. When they met with March to discuss it, "Mrs. March said ‘You can’t leave us. We need you,’" so Ana remained in the program as a banner carrier this summer.

"How many places do you know where a little girl in a wheelchair could be in a marching band?" Zuidema asked. "She (March) does push them hard. She wants excellence, but she also has a love for them and love for what they’re doing."

Of the two March sons who originally spurred their mother to form the band, one is now serving in the U.S. Army and the other is attending Western Michigan University. He plans on returning to the area to help with the program after graduation, March said. March still teaches her other four children at home, often using Saturday as a school day to make up for the Wednesdays dedicated to band. Her husband operates a tax preparation business and also is a part-time administrator at the home-school facility.

"We work everything around the schedule for the band. It’s time-consuming, but it’s worth it," March said.

The bands compete in Michigan School Band and Orchestra festivals and have been invited to perform across the state and at selected other events, including the Peach Bowl in 2003. March gauges the program’s success not by festival ratings, but by the number of students who volunteer to play at nursing homes, who have gone on to study music in college, and who have graduated, married and are now home-school parents themselves. Calling those "the fruits of our labor," she said they demonstrate that the students "take what they learn and apply it."

The name Northern Lights, which applies only to the marching band, was chosen by the members, she added.

"These kids want to be the light of the world, and they’re from the North. So they’re the Northern Lights."

Word of the program has spread in Michigan, and now there are at least seven home-school bands in operation, March said. In the future, she said, she would like to arrange a sharing of instruments among home-school communities in which the instruments would be available for use in Wyoming on Wednesdays, then packed into a trailer and used elsewhere on another day of the week.

"I like the idea of expanding that way to help other people," she said.