The Power to Privatize 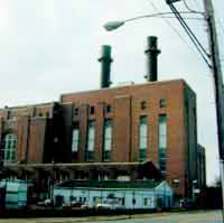 Detroit owns and operates a power company , pictured here. Several of its clients have investigated opting out of the city system. Detroit should sell its plant and get out of the power generation business.

Since 1950, the city of Detroit has lost 48 percent of its population to safer, cleaner, and better-serviced suburbs. As it embarks upon a new century, the Motor City would like to polish its image and create the kinds of neighborhoods that might lure families back to safe, wholesome neighborhoods and a congenial atmosphere.

A step in the right direction might be to privatize electrical power. Although many blame factors beyond Detroit's control for the relentless flight of middle-class families and businesses to the suburbs and elsewhere, recent dramatic reversals of fortune in other American cities demonstrate that good government and quality public services are the keys to holding on to people and commerce.

Detroit runs its own electric power company — poorly. Because the city's Public Lighting Department (PLD) operates with far less efficiency than private, investor-owned utilities, it must of necessity feed on the economic lifeblood of the city. This drains funds away from other city services that might otherwise improve. Private utility companies — of which there are many — can do the job far better for less money.

Detroit has appropriated $67 million to fund PLD operations and capital improvements during fiscal year 2000-2001, which includes a $12.7 million subsidy to cover the shortfall in expected revenues. In other words, far from operating at a profit like a private company must in order to survive, the city currently is operating its power grid at a nearly 19-percent annual loss. This perpetually hemorrhaging arrangement is what generates the more than 318 million kilowatt-hours of electricity that 1,578 public entities and private businesses are forced to use because it is their only choice. Detroit's energy customers include city departments, public schools, police stations, fire houses, libraries, the Joe Louis Arena, the Michigan Department of Transportation, Wayne State University, Cobo Center, City Airport, and the People Mover.

One 1996 analysis found that the PLD spent $57 to produce one megawatt-hour of electricity, compared to $22 spent by private Detroit Edison. This suggests that the city's cost to produce electrical power is as much as 160 percent higher than what it costs in the private sector. One department official only added to the city's embarrassment when, although he could not verify the estimate, he insisted that the PLD's cost per megawatt-hour was really "only" $36.57, or 66 percent higher than the private-sector cost.

With this kind of attitude, it's no wonder Wayne State University and "other unnamed PLD customers" may "flee" PLD services in favor of investor-owned Detroit Edison, as recently reported in The Detroit News. Whichever figure is correct, it is clear that Detroit's citizens are paying more than is necessary for electric power (through high rates and costly tax subsidies) and that these overpayments represent funds that could be better spent on core public functions such as education, police, or road repair.

Moreover, the PLD's claim on the public pocketbook doesn't end with these excessive operating costs. According to a July 2000 article in the Detroit Free Press, the PLD will require an additional $150 million to upgrade a power station and its leadership has requested another $50 million for new and better equipment. The City Council has since hired an outside consultant to determine if this would be the best use of resources.

The benefits of privatization

Selling Detroit's electrical power system to an investor-owned utility such as Detroit Edison would benefit the city in several ways. First, sale of the PLD to a private company would generate a huge, one-time influx of much-needed cash. One Detroit utility expert says electric utilities commonly sell for 1.5 to 2.5 times their book value (also known as "equity"), which could place the private sale of Detroit's PLD at between $301 million and $501 million. It should be noted, however, that Detroit's PLD is so inefficient that it likely would sell for somewhat less than what an operation of its type otherwise might go for.

Another benefit of selling the utility would be the steady flow of new revenue into city coffers through property taxes paid by the utility. But perhaps most important of all is that the sale would result in better service to customers, who could rest in the knowledge that those providing their power are doing so on the understanding that failure is not an option, as it unfortunately can be in a public-sector operation, which continues to receive funding regardless of how efficient or inefficient it is.

What to do about Detroit's lighting and power service has been the subject of ongoing criticism and debate for most of the last decade. Recognizing that a reliable power source is one of the many improvements that must be made if the city is to attract and retain jobs and residents, a variety of reforms have been proposed, including some form of privatization. But so far, such discussions have bogged down in haggling over details, including labor issues.

To minimize such resistance to privatization efforts, officials should be very vocal about their intention to accommodate workers displaced by privatization. They should offer guarantees of employment elsewhere in the city government, and/or generous severance payments and early retirement packages. The cost of follow-through on these promises will be far outweighed by the economic benefits of privatizing the city's power system.

While Detroit already has explored the possibility of "partnering" with private utilities for improving the power system, why tinker around the edges? Private, for-profit utilities successfully deliver energy to their clients in many cities across America.

Ronald D. Utt, Ph.D is a senior research fellow with the Heritage Foundation in Washington.