For Whom the Private "Belle" Tolls

Is It Time to Sell Belle Isle?

The Belle Isle Conservatory needs drastic improvements. The city had promised to spend $1 million restoring its splendor, but has failed to live up to that promise.

Of all of Detroit's assets, Belle Isle, the 985-acre island park situated in the Detroit River just inside the U.S. border with Canada, could very well be the city's most attractive privatization opportunity.

The park was designed by Fredrick Law Olmstead (designer of New York's Central Park) in the late 1800s. Once referred to as "Detroit's Jewel," Belle Isle fell prey to neglect during the 1970s and 80s. Poor stewardship on the government's part nearly destroyed the park until recent efforts were made to restore its original beauty. Today, dredging and cleaning operations are helping restore the series of inland lakes and waterways, and native fish are being restocked and managed. Statues and sculptures are being cleaned and repaired. 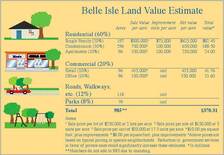 The table shown above lists possible values for the sale of land on Belle Isle. These are conservative estimates because they do not take into consideration assets that would come with the island (such as two golf courses) if it were sold to a private investor.
More images …

But the island has so much more to offer. Handled properly, Belle Isle could become one of the great "right decisions" Detroit's leaders make on the road to revitalizing the city. Those who would disparage the idea of privatizing the island and opening it to commercial developers forget that some of America's most beautiful landscapes are kept and maintained in their pristine condition precisely because that's what the market demands.

Currently, the island contains four marinas, two pavilions, two city-owned golf courses, a driving range, a conservatory, a beach area, a zoo, and a 32,000 gallon aquarium with 146 species of sea life (by contrast, Shedd Aquarium in Chicago has 600 species). Most of these components would enhance the overall sales value of the island, particularly if sold to a developer interested in building an entertainment/tourism mecca.

If a private developer or group of developers purchased the island outright, this would provide a huge one-time cash infusion for the city of Detroit. They could then divide the island into an appropriate mix of commercial, retail, and residential properties. As these smaller lots were purchased and improved, a steady stream of property tax revenue would begin to flow into city coffers on an ongoing basis.

Indeed, Belle Isle could become the private-sector equivalent of Chicago's Navy Pier, complete with a built-in Shedd-style aquarium, and perhaps even a special theatre district, which might include a Shakespeare theatre, opera house, and permanent Cirque du Soleil facility, similar to that adorning Disney World in Florida. The possibilities are endless. Allow for unlimited gaming (casino and sports books) and Belle Isle could become a Midwest Monaco.

How could the city facilitate such growth and development? By exempting the island from the host of economically debilitating regulations that hamper the rapid growth of businesses elsewhere in the city.

It would not be the first time Detroit got out of the island-running business. In 1920 the (then) 52-year-old Detroit Yacht Club received the right to build on a small island just off of Belle Isle. The Yacht Club became the official owner of the land in a land-swapping deal with the city. The club operates there to this day and pays a steady stream of property taxes to the city.

Island sales are not unheard of in this day and age. The privately owned Grass Island, a 45-acre undeveloped island in the Detroit River near the Ambassador Bridge, is being sold by a Canadian family for at least $192,000, according to reports. Worldwide there are 100 islands currently for sale.

How much might Belle Isle sell for? A conservative estimate would be about $370 million. To come up with that number, Mackinac Center for Public Policy analysts examined the land and measured it against the local real-estate markets. The table above shows the results.

These estimates should be regarded as conservative for a couple of reasons. First, there are assets on Belle Isle including the two golf courses, a driving range, and several buildings that are not included in the estimated valuation. Second, the city of Detroit recently raised its offer to purchase a six-acre site on the Detroit River for $2.1 million per acre. This suggests a far higher value for island acreage than is reflected in the economic assumptions used by the Center's real estate analysis.

But working with the $370 million figure, without any development on the island whatsoever, Belle Isle would generate $13.8 million (at current millage rates) in property taxes per year. With development of the kind discussed in this article, that figure could easily double. By law, the way sales of city property are divvied up among Detroit's spending priorities, $13.8 million in new property taxes each year would mean $488,000 more for city libraries, $2 million for Wayne County, $4.4 million for Detroit Public Schools, $1.1 million for the state of Michigan, and $5.8 million more each year for the city of Detroit to do with as it pleases. The city also would also be relieved of its $6.6 million annual appropriation for Belle Isle.

Author and American Enterprise Institute scholar Charles Murray offers an intriguing plan for deregulation that, if it were adopted for Belle Isle, could turn the island into a showplace for the benefits of privatization and deregulation. Applied to Belle Isle, the idea would work out something like this:

The list of options for turning the neglected Belle Isle into a thriving spot for play, entertainment, and tourism is practically endless. Privatization and the curtailment or elimination of Detroit's onerous regulations could turn the island into a commercial giant. Indeed, Belle Isle could quickly become for Detroit what Hong Kong is to China, or what Manhattan is to the rest of New York.

All it would take is courage on the part of policy-makers to champion a great idea and allow the private sector to find the best and most productive use of the city's underperforming assets.