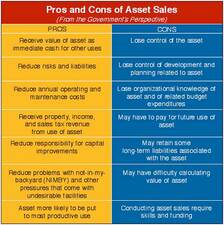 On a given day, somewhere in the world there is an electric utility, a telecommunications company, an airline, a road, a building, or other former publicly owned entity on the private auction block. Overseas, by far the dominant form of privatization is selling assets outright.

Studies, articles, and even books have examined government asset sales and usually extolled their virtues, which include cash infusions for governmental units and an increase in the productive value of the assets. In 1992, the Bush Administration recognized the value of government asset sales, too. President Bush issued an Executive Order on Infrastructure Privatization that reformed a practice regarding federal grants that was serving as a disincentive to selling off government assets. When state and local governments sell assets that were partly funded by federal grants, the grants have to be repaid. The Executive Order allowed the value of the grants to be sensibly depreciated so that the obligation to pay them back in full would no longer discourage asset sales. The order also directed the relevant federal agencies to adjust their policies to facilitate state and local efforts to sell or lease assets.

When it comes time to do budgets, our elected officials won't simply be looking at revenue and expenditure wish lists. They also will be faced with a list of assets, those assets' respective values, and bottom-line funding requirements that must be met in order to maintain those assets. The choice, on each and every item, will be: Spend money to maintain it, ratchet its value downward another year, or sell it to avoid the first two choices. For the first time, all across the country, choice number three will be on the table for every asset, every year.

In the political and economic tradeoffs that ensue, the tendency to entertain the idea of selling assets as a kind of afterthought to the budget process will become a thing of the past. Government pros and cons of selling assets, listed in the table accompanying this article, will play a role in the decision to fund each budget item. In the past, without asset values or costs on their balance sheets, for most governments the cons outweighed the pros. But with the new accounting standards, this may change dramatically.

And that is a good thing. Selling assets shifts resources from government, where assets are harder to measure in terms of value, to a realm of private ownership in competitive markets. This creates opportunities where before there were none: Governments rarely receive market signals such as prices for assets or proposals for alternative uses until they set about selling them. An asset auctioned to private buyers is scrutinized for possible uses, and the value of these is reflected in bid prices.

Adrian Moore is director of privatization and government reform at the Reason Public Policy Institute, a nonprofit research organization based in Los Angeles.