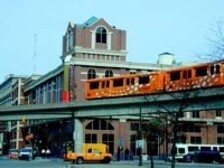 The People Mover is just one component of Detroit's overall transportation system. It should be eliminated in favor of jitney cabs or some other form of transportation. Published reports indicate that Detroit must subsidize each passenger fare by $3.44. In 1999 the total People Mover subsidy was $9.3 million.

With any government service, the public is best served when quality is provided at a cost that is no higher than necessary. Sadly, this is not the case with respect to the Detroit Department of Transportation, a city-run system of buses that operates inefficiently at great cost to Detroit's struggling taxpayers. But this need not be. Privatizing Detroit's public transportation system could result in vastly improved service and could even reduce overall operating costs by as much as 40 percent.

The privatization options are multiple. The city could competitively franchise the system, competitively contract individual routes, or simply repeal the prohibition on "jitneys," sell its buses, and contract only for those services not provided by private companies. There also are opportunities to involve employees by making them owners through a stock ownership plan.

The Detroit Department of Transportation (D-DOT) is the largest public transit system in Michigan. It operates approximately 450 buses that 1,300 route miles throughout the city. Each year the fleet travels 23 million miles delivering 42.5 million passengers.

In the 2000-2001 budget, the city appropriated $172 million to operate this system, $68.4 million of which is an operating subsidy that will come from Detroit's cash-strapped General Fund. This is up substantially from $53 million in 1998.

These financial problems are among the reasons that D-DOT is pushing hard for a full-scale merger with the Suburban Mobile Authority for Regional Transportation (SMART) bus system, which serves suburban counties with routes largely radiating from Detroit's downtown and New Center areas. A merger is also supported by state legislators who have threatened to withhold state funds to each transportation system unless a merger takes place.

However, the merger has been deemed inadvisable by KPMG, an international accounting and consulting firm called in to determine the feasible operating alternatives. KPMG's judgment has been endorsed by six transit-expert evaluators hired to assess KPMG's finding. This is the same advice provided by this author while under retainer to Oakland County Executive Daniel Murphy in 1985, which became the basis for the policy against merger that lasted into the 1990s.

So how can D-DOT be made more cost-effective and reliable? There are four privatization options city officials might consider:

Option 1: Competitive Franchising. The city could competitively franchise the entire bus system to one of a number of large bus companies, for a period of up to 20 years. Under such an arrangement, the private company would provide a basic level of service specified by the city of Detroit, charge fares within a broad range authorized by the city, and renew the bus fleet and facilities. Like D-DOT today, the private company would have an exclusive right to operate service along the city's routes.

Melbourne, Australia, recently implemented such a program. The franchises began officially in 1999. Each of two competitively selected firms now have 20-year contracts to provide expanded and upgraded transit services for a fixed fee - an amount less than it would have cost the former government transit agency to provide the same service. The government expects savings to be substantial.

Option 2: Competitive Contracting. In England, London Transport, which is twice the size of New York City's public transit system and 15 times the size of D-DOT, competitively bids out to private contractors all of its bus services. Competitive contracting has reduced operating costs 45 percent, inflation adjusted. In addition, service quality and the number of passengers using the system are both higher than before. London Transport maintains its right to establish routes, fares, and service standards. It even tells the private contractors how to paint their buses.

The service is operated through hundreds of individual contracts that are re-bid at least every five years. Service operators are still provided with subsidies, but they are far smaller than when the system was under government operation. In some recent years, no subsidy was required.

Detroit could reduce the cost of its operations by at least 40 percent using competitive franchising or competitive contracting. This estimate is based on hourly operating costs. Detroit spends more than $75 per service-hour per vehicle, whereas competitively contracted buses cost approximately $45 per hour, a 40-percent difference. Savings of this magnitude could exceed $60 million annually.

Either of these alternatives - competitive franchising or competitive contracting - could be implemented in Detroit though skillful design would be necessary to accommodate highly intrusive federal labor regulations.

Option 3: Employee Stock Ownership Plan (ESOP). An ESOP is an arrangement like that existing in many corporations, in which employees are issued stock in the company as part of their compensation package. ESOPs have facilitated privatization around the globe.

How do they work? Usually, stock is sold to employees at a discount. In some cases it is given to employees in exchange for their cooperation. Creative approaches could combine an ESOP with competitive franchising or competitive contracting.

The city of Fort Wayne, Ind., considered converting its transit system to an ESOP approximately 10 years ago, but the effort was abandoned due to union opposition. However, a federal report concluded that it was feasible.

Option 4: Legalize Jitneys. Detroit outlaws the use of "jitney" services by private vendors. A jitney may be a taxicab, van, or minibus that charges a flat fee while operating along established routes. In New York, jitneys are providing low-cost, flexible service to low-income residents that is less costly than transit service and more convenient for many riders. Many will provide door-to-door service for repeat customers. If legalized, they could supplement current transit service, reduce subsidy requirements, and provide a new source of income for city residents who could become jitney entrepreneurs. All of this would benefit the community by increasing employment and providing higher levels of service to people who do not have ready access to automobiles.

Privatization of Detroit's public transit system should be part of the city's overall campaign to hold down costs and make the city more "user friendly." City officials should get started soon, before the state imposes an intrusive and less effective solution from Lansing.

Wendell Cox is principal of Wendell Cox Consultancy, an international public policy firm. He has provided consulting assistance to the United States Department of Transportation, among others.