When people think of "city services," a number of things immediately come to mind, such as police, fire protection, and roads. Few, if any, people would imagine convention centers at the top of the list of essential city functions, and yet many municipalities own and operate such centers. 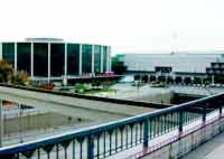 Cobo hosts activities ranging from Ted Nugent's New Year's Eve "Whiplash Bash" to business conventions and does so at a loss - every year. Indeed, Cobo operations have required an annual average subsidy of $9.1 million since 1980.

Why does an important and impressive facility such as Cobo lose money each year, and could a private company take over its operations, maintain or improve quality, and end the annual cash bleed?

The fact that many hotels and other private businesses own and successfully run their own convention centers suggests that Cobo could indeed be safely entrusted to the private sector. Indeed, nearly every major private hotel chain in America maintains convention center-style accommodations, which include services to host the same types of trade shows, banquets, special events, and cultural events provided by Cobo Center. Cobo maintains five exhibit halls, 84 meeting rooms, and four banquet facilities.

Real estate and urban economics professor Edwin Mills of Northwestern University notes that, "Convention centers are naturally competitive . . . [I] have yet to see a convincing demonstration that the private sector in a given community will fail to supply enough convention center space."

How much could the city expect to receive in a sale of Cobo? An article in the February 1991 issue of Detroiter magazine suggested Cobo Center could fetch $50 million. At that price, a privately owned Cobo could actually begin generating revenue for the city, to the tune of $1.9 million in property taxes annually.

The one Achilles' heel of this privatization effort is debt. The city owes $169 million on funds borrowed for the Civic Center. A sale would not cover the amount owed. Still, selling Cobo at a loss and paying off the debt from the proceeds of other privatization efforts is a better option than the current $15 million annual drain on the city treasury.

Detroit need not own its own convention center. There are plenty of private businesses who do, or are willing to provide the same service and do it without government subsidies. The city should sell off Cobo Center and use the savings to pay off debt, improve infrastructure, and enhance the truly essential services that citizens and businesses need to bring prosperity back to the Motor City.