The "Privatized" Cost of Remedial Education in Michigan 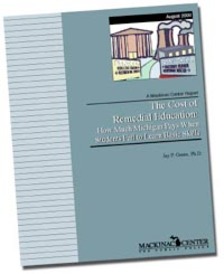 The Cost of Remedial Education: How Much Michigan Pays When Students Fail to Learn Basic Skills, a new study from the Mackinac Center for Public Policy, demonstrates that private businesses in Michigan have to spend $601 million annually to make up for the failings of the public school system.

Privatization in education takes on many forms, from contracting out the management of all schools in a district—as Detroit-area Inkster has done—to turning over non-instructional services such as transportation to private providers.

One form of "privatized" education that is often overlooked is remedial education—training that colleges, universities, and private businesses provide to students who graduated from high school without mastering basic knowledge and skills. The cost of training and educating these graduates is conservatively estimated to be $601 million annually, according to a forthcoming report from the Mackinac Center for Public Policy.

In the public system, Michigan families can now choose from among schools in their local district, charter schools, and schools in other districts.

In addition to estimating the cost of remedial education, the report seeks to determine the extent to which employers perceive Michigan high-school graduates as requiring remedial education. One medium-sized manufacturing firm said that it had begun mandatory basic skills testing of all job applicants. According to this employer, 40 percent of applicants fail to perform at an 11th-grade level. A health care company with fewer than one thousand employees reported that "lower-level employees lack the ability to read and write." Another company with several thousand employees said, "We reject 70 percent of applicants due to not having basic skills of math and reading at an 8th-grade level."

While $601 million pales in comparison to the nearly $12 billion per year spent in Michigan on public elementary and secondary education, it is still quite a large expenditure to fix that which the $12 billion was supposed to provide. Why the need for an ad hoc system of "privatized" remedial education for many public high school graduates?

Interviews with remedial education experts at Michigan colleges and universities produce a variety of answers. Some say that social problems beyond the reach of elementary and secondary schools account for the widespread lack of basic skills. George Swan, dean of arts and humanities at Wayne State Community College, says, "We cater to students who lack the skills to compete for a variety of reasons—age, money, lack of confidence. I can't blame it on the public school system."

But other experts do criticize Michigan public schools for not being rigorous enough. Steve Carlson, chair of the science and mathematics division at Kellogg Community College, comments, "Largely, it's the public schools' [fault.] Ideally, remedial programs should not exist at the college level. Public schools should prepare people to compete at that level, but they do not." A number of remedial educators identified what they considered to be specific failings of the public schools. Sidney Graham, chair of the department of mathematics at Central Michigan University (CMU), blames public high schools for assigning "little homework." Mitzi Chaffer, also of CMU, complains of "lax standards in most high schools." Steven Holder, chair of CMU's English department, finds fault with grade inflation in public schools.

While remedial educators are not able to agree on who or what is responsible for the widespread lack of basic skills among high school graduates, they do seem to agree that their own efforts significantly improve student skills. These assessments, while self-serving, also appear to be accurate, according to independent sources. Researchers David Breneman and William Haarlow note in their study of remedial education that "remediation is surely a good investment."

If, as these observations suggest, remedial education programs are effective and relatively inexpensive, might it be because they compete with one another in the open marketplace of higher education? If students or employers are free to choose from a range of remedial programs, only those programs that produce results at a minimum of expenditure can expect to receive the "business" of students in need of remedial education and therefore continue operations.

By contrast, the public K-12 education system, which some experts believe is the reason remedial education is in such high demand, operates as a near-monopoly. Many students who are not learning the skills they need in their local, assigned public school often have nowhere else to go.

Perhaps the same incentives that work for remedial education programs could help K-12 public schools improve, with the result that more students would graduate with the basic skills they need to succeed in their careers. This would allow colleges, universities, and employers to invest the capital they now spend on remedial education on other things.

Even education itself is starting to yield to the demands of a new competitive marketplace. In the public system, Michigan families can now choose from among schools in their local school district, charter schools, and schools in other districts.

Time will ultimately tell how public schools fare when competition is the norm rather than the exception in education. But for now, private businesses and institutions of higher education will continue to take up the slack for students in need of basic academic skills.

Jay P. Greene, Ph.D., is a senior fellow with the Manhattan Institute for Policy Research and author of the Mackinac Center for Public Policy study, The Cost of Remedial Education: How Much Michigan Pays When Students Fail to Learn Basic Skills.