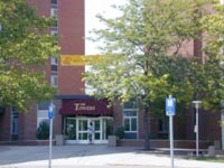 "The Towers" at Central Michigan University look and feel like a multi-building hotel. Why not have a hotel chain own and manage them?

Many Michigan parents know all too well the high cost of their children's higher education, but as taxpayers, they are unlikely to realize just how much they pay to support the state's system of public universities.

And how much is that? The state of Michigan appropriates roughly $1.5 billion annually in direct assistance to its 15 state universities, which currently enroll over 210,000 students.

All of Michigan's state universities privatize their food services to some degree, reaping dramatic financial savings. But have these universities overlooked the potential for further taxpayer and student savings through privatization of dormitory services?

Two reasons for universities to consider privatization of their dorm systems come to mind. First, privatization of dorms would allow the university system to concentrate on its core mission: providing higher education. Auxiliary enterprises, the majority being room and board, generate 10 percent of higher education revenues and expenditures in Michigan. Michigan taxpayers need not be funding what is essentially a state-owned hotel system.

Second, privatization, done correctly, is cost-efficient. All of Michigan's state universities save money by contracting with private companies, such as Aramark, Gordon Food Service, or the Pepsi Cola Company, etc. Central Michigan University (CMU), for example, steadily lost money on its retail food services until it contracted in part with Aramark in 1994. Between 1994 and 1999, CMU saved approximately $890,000 while improving food services.

Using the private sector to provide housing for students is nothing unusual. Private apartment buildings and houses near any campus are filled with students. For entering students, there are transaction costs involved in obtaining housing, but the university does not have to own buildings in order to solve this problem. The university could offer living quarters as part of the tuition package and make the appropriate contract with a private developer or hotel chain to meet this demand.

For instance, the University of Texas at Dallas (UTD) offered the first on-campus privatized housing at a Texas public university in 1989. With little risk on its part (if after 14 months they did not attain 85 percent occupancy, the developer could rent to university-approved tenants), UTD contracted with Lessee, a private company, creating Waterview Park Apartments. Waterview contains about 1,000 units and 3,000 beds, ranging from efficiency apartments to four-bedroom, two-bath units. Waterview's most expensive one-bedroom apartment (approximately $544 per month) costs less than the cheapest off-campus one-bedroom apartment.

According to Robert Lovitt, senior vice president for business affairs at UTD, the school has two types of management agreements in its privatized housing system. Under the first type, the university receives a commission based on gross revenues from those units built, owned, and operated on campus by a private developer. Under the second type, the university receives from the units it owns all income minus a flat percentage fee, which is paid to the private developer that manages the units and pays the operating expenses.

Lovitt estimates Waterview is saving UTD at least $500,000 per year. The UTD model is being emulated in at least nine University of Texas system institutions and more than 15 other universities within the state of Texas.

But Texas is not the only place where dorm privatization is being tried. From 1992 to 1998, Michigan State University leased Butterfield Dormitory to Thomas M. Cooley Law School in Lansing. The contract was dissolved when Cooley was able to provide housing closer to its campus. While this is an anecdotal and brief example, it does show that contracting out for housing does and can work in Michigan.

Dorm privatization, currently non-existent in Michigan state education, would save taxpayers money while increasing universities' ability to focus attention and resources on education. It is currently working well in universities throughout Texas. The lesson for Michigan institutions of higher education is clear: Turn student housing over to the privatesector and reap the benefits.

Gary Wolfram, Ph.D., is George Munson Professor of Political Economy atHillsdale College. Anne Kirsten is a 2000 summer research intern at the Mackinac Center for Public Policy and a student at Bob Jones University.