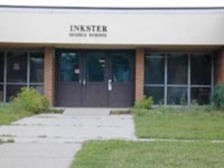 This dilapidated building houses the Inkster Middle School. It is one of several failing schools in the district that will be taken over by Edison Schools Inc., a private company with a track record for building successful schools.

If critics of "for-profit" education were to stop and think about it, they might realize that they, like most people, depend on profit-driven businesses to meet many of their daily needs. Instead, they often take for granted the private provision of such essential goods and services as food, shelter, and clothing.

But the question then arises, if the profit motive can work to provide these necessary things, why not extend the power of profit to another vital area, education?

Detroit-area Inkster Public Schools is doing just that. The troubled district's decision in early February to contract with Edison Schools Inc. represents only the third complete school district in the nation to turn its management over to a for-profit company.

Edison's renegotiations with the employees' union led to a pay scale based partly on performance and the possibility of stock options for teachers who excel.

Edison, a New York-based management company with a reputation for turning around failing schools, beat out several competitors in the bid to manage Inkster's schools. Edison currently operates nearly 80 public schools nationwide and boasts a 38,000-student enrollment. More than 20 of these schools are located in Michigan. Edison's experience is largely in lower-income and minority districts, making it a perfect fit for Inkster.

Inkster also is plagued by financial and personnel difficulties. Over the years, the district amassed nearly $2 million in debt and suffered from a high superintendent turnover rate (the current superintendent is the fifth person to lead the district in the last four years). Miserable test scores, a mere 38.7 percent graduation rate, and a 19 percent dropout rate round out the district's woes. 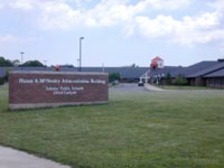 This new, well-maintained building houses the administration services and elementary school for the Inkster school district.

Edison's strategy for rescuing Inkster is twofold. The first step is to bring Inkster back to "ground zero" by wiping out the district's massive debt. The second step is to transform Inkster schools through procedural and other changes. Edison will invest $4.5 million for educational improvements in the district including a computer for every student in the third grade or above and a laptop computer for every teacher. The five-year contract between Inkster and Edison also creates a 200-day school year and an eight-hour day for students in the third grade and higher.

Edison's deal with the district gives the company great flexibility in determining staff levels, (all current employees are expected to retain their jobs), school principals, a CEO and curriculum. But the board's authority remains strong, too. Most changes require board approval, and year-end annual reports will allow the board to closely monitor Edison's actions and their impact on student progress. In addition, Edison is required to provide the board with monthly updates regarding management performance. If board members like what they see, they can renew the contract with Edison early in 2003 or when the agreement expires in 2005. If members decide they are unsatisfied with Edison's work, they are free to terminate the agreement.

What results might parents and board members expect from a privatized school district? Edison's contract with the district contains a guarantee that the number of passing MEAP scores in reading and math will increase by 3 percent in the first year, with a yearly improvement rate of 5 percent each year after that. It also guarantees that passing MEAP scores in writing, science, and social science will increase by a total of 10 percent by the end of the contract period.

But MEAP score improvements are not the only criteria the board will use to evaluate Edison. Other measures of achievement outlined in the agreement include increased student enrollment; greater parent, teacher, and student satisfaction; more family and community involvement; and better attendance.

The Inkster-Edison partnership also is expected to be good for the district's teachers. Edison's renegotiations with the employees' union led to a pay scale based partly on performance and the possibility of stock options for teachers who excel. Edison also will provide teacher training and ongoing professional development programs.

Nevertheless, some people remain uncomfortable with idea of a private firm managing an entire school district. According to Michigan Association of School Boards member Anthony Derezinski, Edison is "not in it for the good of the school district. They're in it to make money."

Of course Edison intends to make a profit from the services it provides. But is this necessarily a bad thing?

In his famous 1776 treatise, The Wealth of Nations, Scottish economist Adam Smith first introduced the concept of the "invisible hand." Market participants, Smith reasoned, act out of a desire to make money. But the only way they can do this is by serving the interests of those with whom they interact. It is not the benevolence of the butcher, the baker, or the brewer that compels him to provide patrons with inexpensive, quality goods—it is his desire to earn a profit. In this way, Smith tells us, in their quest to make money, people in the market are guided "as if by an invisible hand" to promote the good of others.

Indeed, for-profit management firms like Edison have powerful incentives to provide low-cost, quality education that government-run districts simply do not have. If state-managed schools are poorly run, the curriculum sub par, or teachers inept, what can parents do? Charter schools offer some relief and private schools are an option for those who can afford them. But for the most part parents and students are stuck in a bad situation.

Private management, on the other hand, offers many more avenues of accountability. Private firms can be fired if parents are unhappy with the results. For-profit companies thus have a strong incentive to give parents what they want. Unlike government, private firms like Edison are likely to invest in cutting-edge technology, undertake research and development, and ensure the utmost quality of their service, because they stand to reap profits from doing so.

Under government management, schools have no special incentive to keep costs low, show concern for student futures, or retain talented educators. This does not mean that schools will not do these things, but it does mean they aren't likely to do them as consistently or diligently as an incentive-based firm.

By voting to harness the powerful incentives of the private-sector marketplace, members of the Inkster school board took a bold step toward improving education for the district's students. Time ultimately will tell if Edison delivers on all of its promises. But if it does not, Inkster can hire another firm to do the job—a firm that knows it profits only so long as students profit—from a better education.