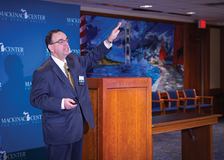 Lee McGrath, an attorney for the Institute for Justice, discusses the problems of occupational licensing at a Mackinac Center event.

In Michigan, it takes 26 days of training to become an EMT, but years of education to become an athletic trainer.

This is just one example of inane licensing requirements outlined by Institute for Justice attorney Lee McGrath, who spoke at a Mackinac Center event on the issue in February.

Compared to some, Michiganders have it lucky. People who practice traditional hair braiding here are not forced to spend time and money on irrelevant cosmetology courses. Florists needn’t pass a license test with a fail rate higher than that of the state bar exam. But many of Michigan’s neighbors in the Midwest have less restrictive licensing regimes, and following suit would improve unemployment numbers and the state’s economy as a whole.

McGrath made a compelling case, demonstrating the true origins of occupational licensing. Most people think of licenses as a way to ensure public health, or as a safeguard against criminal or unethical conduct – why else would we license doctors and lawyers? But in truth, most licenses were created at the behest of professional organizations with an interest in limiting competition and erecting barriers to entry.

Licensing does not improve the safety of consumers, McGrath pointed out. It is inherently elitist, forcing low-income individuals out of the market for jobs everyone but the licensing board feels they are qualified for. He suggested a number of alternatives to occupational licensing – alternatives that would allow for experience and innate talent to shine through.

Michigan has taken some steps to reduce the licensing burden on its workforce. Gov. Rick Snyder sent a letter to leadership in the House and Senate in 2015, outlining his criteria for determining which licenses are necessary and which aren’t, promising to veto proposed licenses that don’t meet his standards. That’s a fine first step. But there are still plenty of regulations on the books that ought to be reformed.