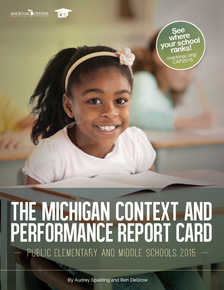 For the fourth time since 2012, the Mackinac Center has generated a report that provides a much-needed analysis of how Michigan public schools really perform.

Our Context and Performance Report Card makes the best use of publicly available data to provide insights that reveal what the raw numbers alone may not.

The latest edition, released in February and co-authored by former education policy director Audrey Spalding and me, rates more than 2,200 elementary and middle schools statewide. All the reported scores on the last three years of MEAP tests provide a credible and consistent foundation for the rankings.

As with previous editions, the raw test scores are weighted against student participation in the federal free lunch program. Currently, a family of four earning less than $31,525 qualifies for free school lunches. On average, these students tend to bring extra challenges with them and start out behind their more affluent peers.

The report card’s results serve as a reminder not only that poverty rates generally affect learning outcomes, but also that schools vary in how well they surmount the challenges low-income families present. Demography does not have to equal destiny, and the bar for learning can be raised.

In contrast, the state’s official Top-to-Bottom School Rankings obscure some meaningful distinctions between schools. On that list, Martin Luther King, Jr. Education Center Academy, a Detroit charter, and Dearborn’s Lowrey Middle School blend into the middle of the pack. But on our new report card, the two schools stand out as first and seventh in the state, respectively. Both get exceptional results with high-poverty student populations.

The release of our latest Context and Performance Report Card has garnered a fair share of attention — from a metro Detroit news radio station to a Traverse City talk show personality and newspapers from both the Lake Michigan and Lake Huron sides of the state.

Clearly an appetite exists for information that distinguishes great schools from mediocre and poor ones. Not to mention how hard it can be to resist a good list.

Local media outlets are mostly interested in providing acclaim for local schools that earned an A (those that finish in the top 10 percent), or are the top performer in a city or county. But concerns also emerge around the bottom 10 percent of schools that receive an F grade.

One media figure asked me on air if there is a track record of low-graded schools making a serious effort to turn things around in response to our past report card’s findings. Although these reports are not the strongest incentives schools face, we would be glad to see them motivate focused efforts on academic improvement.

Perhaps our work could also inform improvements in the official rankings. Some state lawmakers have touted the idea of making the school accountability system more transparent and accessible by converting it into an A-to-F grading format. In so doing, the Legislature also ought to look at how schools are rated, not just how they are reported.

The Mackinac Center’s report card does not offer explanations for why some schools do better than others. Other research tells us the in-school factors that are likeliest to change the trajectory for disadvantaged students. High-quality teaching and school leadership remain at the top of the list.

Unpacking the numbers could start a deeper investigation that leads to productive changes. You can start an investigation, or just satisfy your curiosity, by checking out the complete searchable school context and performance database at www.mackinac.org/CAP2015.