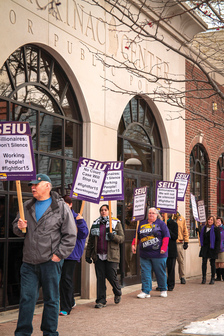 According to a press release sent by Progress Michigan on behalf of the Service Employees International Union, the Jan. 7 protest was a direct response to the Mackinac Center’s work in making Michigan a right-to-work state, as well as its support of the Friedrichs case. That case could give public employees across the country the freedom to not pay union fees as a condition of employment.

Mackinac Center Executive Vice President Michael Reitz said in a statement to the media that the SEIU protest was a fitting nod to First Amendment protections, which the Friedrichs case is ultimately about.

“Just as people are free to protest under the First Amendment, the Mackinac Center believes teachers should be free to choose what political organizations they want to support, which is the central issue in the Friedrichs case,” Reitz said.

Reitz went on to remind the media that the SEIU took over $34 million from home health care workers, many of them simply looking after family members, by unionizing them without their knowledge or permission.

“When given a choice, nearly all of those individuals stopped paying union dues,” he said. “The organizers of this protest apparently wish to preserve their power to keep forced dues flowing.”

About 10 people paced the sidewalk outside the Mackinac Center’s Main Street entrance in downtown Midland for just under an hour. Most of the signs urged raising the minimum wage to $15 an hour and said nothing of Friedrichs, unionism, or the Center.

The Midland Daily News and MLive covered the protest, which Reitz said is a testament to the impact the Mackinac Center is having even beyond Michigan.

“The fact that a union would protest the Mackinac Center for supporting the California-based Friedrichs case shows that the Center is a national leader in the labor reform movement,” Reitz said, noting that in the days before the Supreme Court heard oral arguments, the Mackinac Center was the only think tank to be the subject of a protest by opponents of worker freedom. “For years, the Center has been involved in right-to-work and labor reform efforts across the country to ensure no union can get a person fired for choosing not to fund an organization he or she may not agree  with.”

In the Friedrichs case, the Mackinac Center Legal Foundation submitted two briefs in support of the plaintiffs. It also has been a leading source of information on the case and the possible effects of expanding worker freedom to public employees in non-right-to-work states. Additionally, the Mackinac Center created a Web page and produced a video to provide information to the media, public and other think tanks. Other employees also participated in numerous local and national interviews on the case.

Unscathed by the protest, six members of Mackinac Center’s executive, legal, policy and communications teams, along with board member Richard Haworth, traveled to Washington, D.C. to hear oral arguments in the case, rally on the courthouse steps, speak with members of the media and support teacher Rebecca Friedrichs and her fellow plaintiffs.