Right-to-Work Case Will Be Reargued 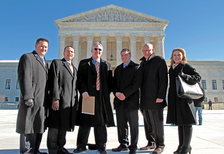 The passing of Justice Antonin Scalia was a seismic political and legal event and the naming of his replacement could have far-reaching consequences for the law. In particular, many point to Friedrichs v. California Teachers Association as a case where his replacement could provide the deciding vote. At issue are the free speech and free association rights of over 7 million public employees.

The lead plaintiff, Rebecca Friedrichs, and nine of her California schoolteacher colleagues brought a suit to challenge a policy that forces them to financially support the California Teachers Association through agency fees. A ruling in their favor would essentially make all unionized public sector employees throughout the country right-to-work. Nearly 40 years ago, the Supreme Court approved mandatory agency fees in the case of Abood v. Detroit Board of Education, believing that the state had an interest in having one entity to bargain with. At that time, the court uncritically accepted the claim that an agency fee was needed to make sure that unions were financially viable to act as a bargaining agent.

Perhaps due to the Mackinac Center’s work in exposing the home day care dues skim, the Supreme Court had begun to question the assumptions behind the Abood ruling. Just two years ago, in Harris v. Quinn, the Supreme Court chose to not apply the logic of Abood to home health care workers, meaning they no longer had to pay agency fees. Both the five-member Harris majority, which included Justice Scalia, and the four-member minority discussed Abood at length. The primary issue the dissent focused on in its defense of Abood was whether unions would survive without agency fees.

The Friedrichs case sped through the lower courts, which, due to Abood, had to rule in favor of the union. The Mackinac Center filed two amicus briefs on Friedrichs at the Supreme Court – one as the court was deciding whether to hear the case and a second one after it decided to do so. Both briefs directly addressed whether unions could survive without agency fees.

The briefs we filed looked at Current Population Survey data from the Census Bureau to determine what impact right-to-work has had on union membership. We found that in states with agency fees, union membership is around 90 percent in worksites that have a union. In right-to-work states, it’s around 80 percent. These findings contradict the Harris dissenters’ claim that right-to-work necessarily destroys unions because everyone will eventually refuse to pay the union. The briefs show that the contention is just wrong.

The court heard oral arguments on Jan. 11. Mike Reitz, Vinnie Vernuccio and I were the first three people in the lawyers’ line and Joseph Lehman was one of the first in the general population line. Board member Richard Haworth also attended. We all had great seats for an invigorating argument.

During the oral arguments, the unions, state of California, the United States Solicitor General and the Harris dissenters themselves largely abandoned the idea that unions would not survive. Instead, they claimed that when acting as an employer, a government can limit First Amendment rights.

The union-survival issue was instead initially raised by Justice Scalia. Time and again, those in favor of forced union support were unwilling or unable to argue that unions could not exist without agency fees. In fact, the solicitor general explicitly abandoned the idea during his presentation. The teachers’ counsel indirectly referenced the Mackinac Center’s brief during his rebuttal. It appears that our work had taken the union-survival argument away.

Most commentators believed that the case was headed to a 5-4 decision in favor of the teachers. But Justice Scalia was one of those five votes. Given the importance of the case, it will now likely be held over until there is a ninth member of the court, and then reargued. Justice Scalia’s passing and the uncertainty surrounding the Friedrichs case remind us of the tenuous nature of some of our most-cherished rights and highlight our need to have multiple avenues to establish and protect them.