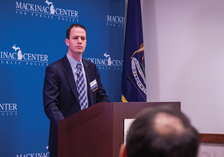 Kevin Cotter, (R-Mt. Pleasant) Speaker of the House, at the Mackinac Center's Friends of Freedom event.

The Mackinac Center hosted Michigan Speaker of the House Kevin Cotter as part of its Friends of Freedom lecture series on Feb. 3, 2016. A crowd of about 70 joined the center’s staff for the event at its headquarters in Midland.

Speaker Cotter praised the Mackinac Center for being a “tremendous resource” in helping educate lawmakers and the public about positive policy reforms. He mentioned the work the Legislature has done in recent years to improve the state’s regulatory structure, tax structure and overall business climate and reputation. Even with these improvements, the speaker admitted that he didn’t initially think it was possible to make Michigan a right-to-work state or to eliminate the state’s ineffective film subsidy program — two successful policies the Mackinac Center pushed for many years.

The speaker also discussed internal improvements that have been made during his tenure in the Legislature that he believes has made state government more responsive and accountable to voters. He cited the fact that the legislatures he has worked in have successfully agreed to a state budget on time every year since 2011 — something that was rarely accomplished in the preceding decade.

Additionally, Speaker Cotter trumpeted the House Republicans’ use of a published agenda. This agenda is a list of legislative priorities and is made public at the beginning of each session. He said that voters can use this agenda as a yardstick to measure the effectiveness of their representatives.