The Next Evolution of Worker Freedom: Freeing Workers and Unions from Forced Representation 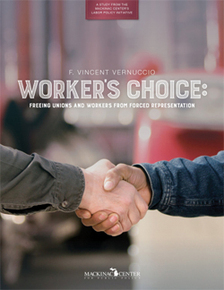 It is time to give workers and unions a full choice regarding representation. Even in right-to-work states such as Michigan, where a union cannot get a worker fired for not paying it, workers are not truly free. Workers under a union contract must accept union representation whether they want it or not. It does not matter if they resigned their union membership and fully opted out of paying dues (as they can in right-to-work states) or are agency fee payers (in non-right-to-work states). The union still controls almost all interactions between employers and employees, from bargaining over contracts to the settling of grievances.

Unions, on the other hand, are the exclusive representative in almost all bargaining units, meaning they have a monopoly over representation. This monopoly imposes on unions the “duty of fair representation” of all workers in a unit, even those who pay them nothing. It is no surprise, then, that one of the main union complaints about right-to-work is that it creates “free riders,” or people who receive union services without payment. But these workers could just as easily be called “force riders,” because they are forced into accepting representation.

A new Mackinac study suggests a novel solution to the free/ forced rider problem: Allow workers to fully opt-out of union representation. The concept, called “Worker’s Choice”, means not only giving these workers the ability to stop paying dues but also the ability to represent themselves. The study is careful to not change collective bargaining in any other way. It includes model legislation that states can enact for their public sector workers. (Changes in private sector labor law must be initiated by the federal government.)

The suggested model legislation safeguards against any drastic changes in collective bargaining. One union, not many, would still represent anyone who wants union representation in a currently unionized unit. New unions would still organize by getting a majority of employees to agree to unionization. The difference under the new model of unionism would be that currently unionized workers who want to represent themselves would be treated as the 60.8 percent of public sector workers who are currently non-unionized. They would have the ability to negotiate directly with their employers and not have to go through the union if a problem arose at work.