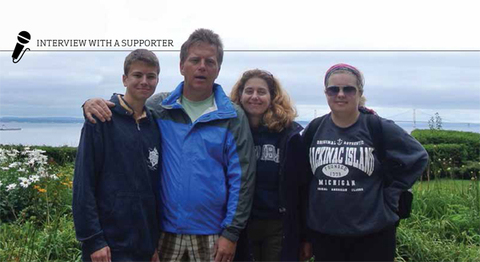 Mackinac Center: Where are you originally from?

John Joslin: I’m originally from Lansing. I’ve lived in Michigan most of my life. I’ve been in Clarkston since 1968. I consider it my hometown. I live there now with my wife, Rosemarie. We have a daughter, Ariel (20) and a son Derek (16).

MCPP: What do you do for a living?

Joslin: The company my wife and I own is Dawnco. We sell large commercial satellite antennas and fiber optic products. Many of our customers are television stations in Michigan and across the country. The satellite antennas are 10 feet to 15 feet in diameter. We’ve been in business for 27 years. Rosemarie directs purchasing and finance. I’m responsible for sales and marketing.

MCPP: What got you interested in owning your own company?

Joslin: Since I was young, I’ve had an entrepreneurial spirit. I started selling newspaper subscriptions when I was 12 and continued for years on my paper route. My youthful enthusiasm helped sell quite a bit. I would identify the homes not receiving newspapers and try to persuade them to purchase the paper. The Detroit News would hold contests where if you sold enough newspapers you would win trips. I remember winning trips to New York, Virginia, Florida and Canada. It was empowering. I felt that I could improve my life with a solid work ethic. I would work my paper route two hours a day. I knew if I put the effort in, I would get good results.

MCPP: How did you transition into the satellite antenna industry?

Joslin: Studying business at Northwood University, I learned about anticipating trends and technology. I wondered what would be the next big thing and what products and services were growing. I saw that with cable and satellite technology. This was the early 1980s. It was fascinating going from a few channels to dozens of channels. The student lounge at Northwood had cable (none of the dorm rooms had it) and it garnered a lot of attention.

After college, I started working for a cable company in Bay City selling door-to-door. From there, I found a job in New York working for a distributor for the cable industry and its new satellite division. Another company bought us out and I was on my way to Chicago for a high-ranking job in a much bigger company, but I wasn’t sold on moving. I had gotten to know a woman who was from New York and we developed a relationship. I didn’t know what to do. I didn’t want to leave her, take this job, and possibly never see her again. A trusted friend gave me good advice about his mistake of allowing a good woman to get away from him. So I told my boss I wasn’t moving to Chicago. I canceled the apartment I had leased in Chicago and further nourished my relationship with Rosemarie.

She knew I wanted to start my own business, so she encouraged me to go in that direction. I did. I had to work a different job at nights, but I built the business and landed an order from Exxon six months into my business. From there, I was able to quit my night job and bought an engagement ring. We married and worked the business very well together. It was Rose’s idea to go back to Michigan. She knew I wanted to go back. There’s a much lower cost of living.

MCPP: When did you first hear of the Mackinac Center?

Joslin: Larry Reed became president of the Mackinac Center and my wife and I moved our business to Michigan around the same time. Larry was one of my professors and I wanted to support what he was doing. He taught me Austrian economics, and I believed in the value of free markets.

MCPP: What value do you find in the Mackinac Center?

Joslin: It points Michigan in the right direction for a more prosperous state. It shows how government can impede development.