Legislature to Discuss a Simplified Path Toward Amending the U.S. Constitution 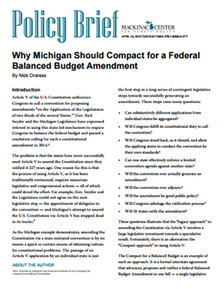 Nick Dranias is a self-made expert on Article V of the U.S. Constitution. Those long-removed from a high school government class might not recall this particular section: It enables the states to start the process of calling a convention for proposing constitutional amendments. Although the Constitution has never been amended by this means, Dranias thinks it can be, and he lays out his case in a new study published by the Mackinac Center in April.

Dranias, who is the president and executive director of the Compact for America Educational Foundation, is particularly interested in using Article V to force Congress to balance its budget. Fiscal conservatives have been calling for this amendment for quite a while — in fact, Michigan’s Legislature approved a resolution last year to this effect — but so far, nothing’s really gotten off the ground.

Dranias’s plan is to use a state “compact” to simplify the Article V process. Traditionally, states have assumed they needed to pass several separate resolutions and bills to start the Article V process. The compact Dranias lays out rolls all state-level actions into one compact, which states would only need to take one vote on. It also protects against a “runaway convention” by limiting the convention’s scope to voting up or down on a pre-drafted amendment in a 24-hour period. In the end, the compact approach to using Article V requires only a single legislative action by 38 states, a majority vote of Congress and a predetermined convention vote.

In the study, Dranias explains how this approach produces certainty, safety, synergy and speed when it comes to using Article V to amend the U.S. Constitution. A few states have already signed off on the compact. The issue is slated to be considered in Michigan soon,
so stay tuned.