The state’s largest pension plan, the Michigan Public School Employees’ Retirement System, is underfunded by $25.8 billion. This is 13 times larger than the state’s general obligation debt.

Other pension systems around the state are also underfunded. Michigan’s state employee system carries a $6.2 billion unfunded liability. The state’s 50 largest cities have an additional $3.4 billion in underfunded pensions.

State Constitutional protections have failed. In addition to making pension benefits contractual rights, the state constitution mandates pension funds be set aside as benefits are earned – governments have not abided by this policy. Detroit pensioners agreed to cuts to their benefits when the city became insolvent and declared bankruptcy.

But there’s a solution to the problem.

It wasn’t supposed to be like this. Governments are required by the state constitution to pay for pension benefits as they are earned, instead of kicking the costs to the future.

It’s not about the generosity or thriftiness of the benefits. It’s about making sure that earned benefits are paid.

Instead of creating long-term liabilities that have been underfunded, state and local governments should offer defined-contribution retirement plans. This allows employees to control their own retirements instead of employers promising benefits and paying for them later.

Employees don’t need to look to courts to determine whether they will get a benefit, they can look to their own financial statements.

The private-sector has already largely made this transition. According to the Bureau of Labor Statistics, 69 percent of full-time private-sector employees have access to defined-contribution retirement benefits.

Michigan is a leader in government pension reform. In 1997 the state closed its state employee pension system to new members. While the plan was fully-funded at the time, there is now a $6.2 billion underfunding gap for those remaining members of the system. Yet by offering new employees a 401(k) plan, the state saved taxpayers from being responsible for a further $2.3 billion to $4.3 billion in unfunded liabilities. 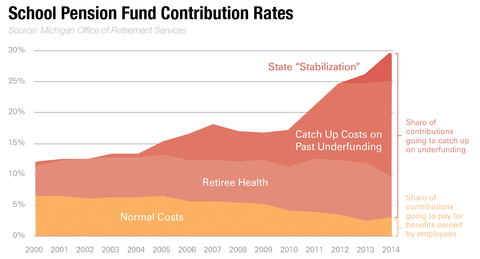