Recommendations to Improve the Labor Movement 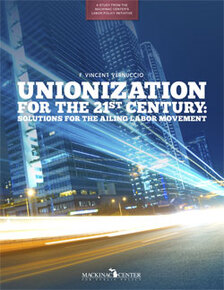 This study is available online at Mackinac.org/s2014-07

The union business model, based on industrial organizing of the 1930s, does not translate well in today’s educated workforce.

Unfortunately unions have not adapted to this modern shift in work demographics.

The new Mackinac study "Unionization for the 21st Century" proposes a way forward for the labor movement.

This study recommends several ways to improve labor organizations by making them more responsive, refocusing their efforts to be more like professional associations which at their core are about services and representation.

In order to thrive, unions must move away from the coercive nature, monopolies, and privileges that were given to them by the labor laws of the last century. The way for unions to grow again is by allowing them to enter the free market and compete for the hard earned voluntary dues of their future members.

Central to this idea is allowing unions to vie for members and only represent those members who wanted to be represented.  These unions should cater to the skilled individual worker of the 21st century and not impose an outdated one size fits all model on them.

In many cases, even the choice of representation could go further. Instead of simply giving a worker a take-it-or-leave-it proposal, unions could specialize in à la carte services where their members could pick and choose what they wanted from one or multiple unions.

The four areas which the study recommends 21st century unions can thrive are: