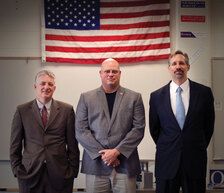 Living by principles can often lead one to make choices that can be difficult and challenging. Brighton High School teacher Adam Neuman made an extremely challenging choice when he decided to take a sabbatical from teaching so that he could join the military and serve in Afghanistan. So it should come as no surprise that Neuman was willing to stand up to the Michigan Education Association when it attempted to violate his freedoms under Michigan’s right-to-work law.

Neuman attended Brighton High School as a student and eventually returned there to teach civics and Advanced Placement government. In 2008, at the age of 34, two things motivated him to join the Army Reserves. First, he had known a first responder who had died in the aftermath of the 9/11 attacks. Second, some of his former students were being called back into service under the military’s stop-loss program. In 2011, he served in combat during the Kandahar surge where one of his duties was to carry fallen soldiers to the plane that returned them home. His time in Afghanistan gave him a strong appreciation for liberty.

Another thing Neuman took from his time in the Army was an appreciation for that institution’s unwillingness to tolerate incompetence. In contrast, he believes that the MEA and his local teacher union protect ineffective teachers. Further, the National Education Association had taken a public position against military involvement in Afghanistan.

Thus, when presented with the opportunity to resign during the MEA’s so-called “August Window,” he did so and as a consequence of Michigan’s right-to-work law’s passage expected that to be the end of the union attempting to collect money from him. The union had other ideas.

In its September 2014 contract with the school district, the Brighton Education Association sought release time for its president. Release time allows a union official to perform union business instead of teaching while still receiving a full salary from the district. In March 2011, the Mackinac Center estimated that this practice cost taxpayers $2.7 million in the schools alone. Surprisingly, given that release time is in essence a gift to the union at taxpayer expense, the practice is not illegal. But the manner in which the union and district agreed to implement it in Brighton’s collective bargaining agreement was. The agreement violated both right-to-work and a law preventing school districts from administering paycheck withdrawals for the union.

The district sought to ameliorate the effect of the release provision by having the union pay for any time used above a certain threshold. The contract authorized the union president to receive a full salary with a maximum teaching load of four hours. The union president was given an hour a day to perform union business. Any overage on this amount was to be paid by the union through a payroll deduction from all teachers. This method meant that teachers who resigned from the union under right-to-work would be forced to provide funds to the union.

The Mackinac Center Legal Foundation filed a lawsuit on Adam’s behalf on Oct. 15, 2014. The case received significant publicity. Adam and I appeared on “The Frank Beckmann Show” on WJR AM760. The case was  a front-page article on FoxNews.com and also made Reason.com.

But, perhaps the most interesting media coverage was from the local newspaper, the Livingston Daily Press & Argus. It got a feisty quote from the Brighton Education Association president, Ellen Lafferty, who brazenly claimed the lawsuit was based on erroneous facts. She stated: “It would behoove Mr. Neuman and the Mackinac Center to check their facts before filing and publicizing this lawsuit that is 100 percent untrue.” Lafferty might want to hesitate in the future before offering legal analysis.

Almost immediately, the union and school district began work on changing the collective bargaining agreement. Perhaps in an attempt to allow Ms. Lafferty to save face, the language of the collective bargaining agreement was changed to comply with the law and Neuman’s suit through an Oct. 20, 2014, “Confidential HR/LR Memo.” That document was signed on behalf of the district by the superintendent and by Ellen Lafferty on behalf of the union.

While Lafferty’s actions amuse, Neumans’s actions should inspire. He is someone who has repeatedly been willing to live up to his principles, whether that involves dangerous military service or merely standing up and drawing attention to lawless behavior by the union. After the case was dismissed, Neuman explained “I just didn’t want to be forced to pay for an organization I’m not part of.”