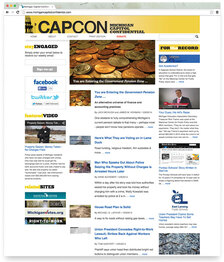 ForTheRecord (FTR) posts are candid and hard-hitting quick bits on political statements and activities around the state. Ever read something you just know is flatly untrue? FTR is there to correct the error.

In its short existence, the new feature has had several stories explode in popularity and get picked up by more mainstream media sources.

Fox News picked up and ran with FTR’s bit on a liberal economist complaining about CEO pay while making nearly $243,000 to teach a few college courses at a public university.

Other pieces have included:

FTR posts are meant to be short, easy-to-understand and very shareable by email and social media. (Our reporters say they are also very enjoyable to write.)

As our news website continues to expand in reach and content, providing even more reality checks for those in the political world will serve an important function. Come check out other examples at MichCapCon.com/ForTheRecord.