F. H. Buckley with the Mackinac Center and the Acton Institute 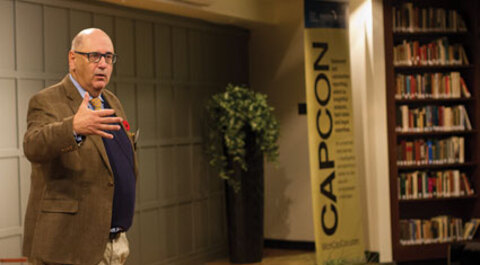 The Mackinac Center teamed up with the Acton Institute to bring Dr. Frank Buckley, a professor at George Mason Law School, to Grand Rapids to discuss his new book. Dr. Buckley has also taught at the University of Chicago, Montreal’s McGill University and the Sorbonne in Paris. He also serves as editor of The American Spectator.

“The Once and Future King” is about the “rise and fall of crown government” and discusses the increase in executive power in the United States. Dr. Buckley views this as a significant problem facing American democracy, as it disrupts the balance of power the American Founders attempted to establish through limited powers attributed to the legislative, judicial and executive branches of government through the United States Constitution.

At the lecture, which took place at the beautiful Acton Institute building, Dr. Buckley first set out to debunk some myths. He noted that most people believe the United States system of government does a good job at protecting our freedom. But despite America’s constitutional republic, by many measures, parliamentary regimes — where a country’s leader is elected by the legislature — are generally freer.

Our current two-party system tends to shift more power to a president who is elected democratically. Dr. Buckley said the executive branch has been getting more powerful over time and American presidents now take action far beyond what the Founding Fathers envisioned or intended. Dr. Buckley believes there is a legitimate need for an executive power, but that power must be limited.

“What they expected,” he writes in the book, “was a country in which Congress would dominate the government and in which the president would play a much smaller role.”

Dr. Buckley said recent presidents have all shifted power away from the legislature and towards themselves. But the Obama administration has been a particularly bad offender.

Audience members were interested in knowing what could be done to solve this problem, which seems to be a bipartisan issue.

Dr. Buckley believes there are two feasible ways forward. One would be a constitutional convention with new amendments dedicated to explicitly limiting presidential power. The other would be Congress doing what it can in the current system to reclaim authority.

He believes the latter is much more likely and said there may be a chance for a bipartisan legislature to do so. The problem is that moves to shift power from the executive to the legislative branch would have to be done in a way that does not look overtly partisan, since the make-up of the Congress is not likely to overwhelmingly favor Republicans or Democrats in the near-term.

The event was a partnership with the Acton Institute, which is dedicated to “promoting a free and virtuous society characterized by individual liberty and sustained by religious principles.” The talk took place at the Institute’s new and refurbished building, which features a new lecture hall, tens of thousands of books lining the walls, and an art gallery.