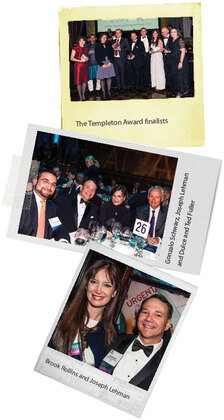 The Mackinac Center was honored to be one of six finalists for the 2013 Templeton Freedom Award, an annual prize given out by the Atlas Network that recognizes exceptional achievement in the global free-market think tank community. The Center was nominated for our role in Michigan becoming the nation’s 24th right-to-work state.

The Atlas Network was created by Sir Antony Fisher and serves a network of some 400 free-market think tanks in 80 countries. Fisher, often called “the Johnny Appleseed of the free-market movement,” also founded the Institute of Economic Affairs in London, the Fraser Institute in Canada and the Manhattan Institute in New York City.

Fisher was moved to his work after, as a young RAF pilot in World War II he read F.A. Hayek’s “The Road to Serfdom.” He later was talked out of going into politics by Hayek. Instead the Nobel laureate told Fisher that society’s course would be changed by ideas.

The Templeton Award is given each November by the Atlas  Foundation at its Liberty Forum and Freedom Dinner.

As Executive Vice President Michael J. Reitz detailed in the last edition of IMPACT, the other finalists were:


The panel of international judges ultimately gave the award to the TaxPayers’ Alliance, although during the ceremony as each finalist was introduced the Center received by far the loudest reception.

As President Joseph G. Lehman left the stage with the other finalists that night, he was greeted by Labor Policy Director F. Vincent Vernuccio with a high-five and a hearty “Joe, this only proves Mackinac hasn’t peaked yet!”