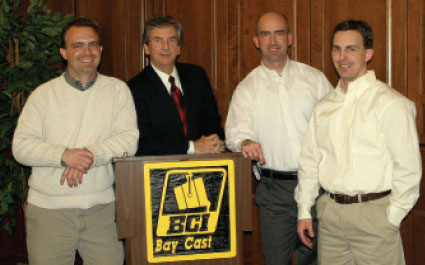 The Mackinac Center for Public Policy is funded solely by freedom-loving individuals and organizations that find value in its conviction of free-market principles.  For this issue of IMPACT, we hear from Scott L. Holman. He was elected chair  of the Michigan Chamber of Commerce Board of Directors for 2014.

MCPP: Where are you from?

Scott Holman: I was born and raised in Ishpeming, Michigan, which is in the Upper Peninsula. I spend six months of the year there. I was a student at Northern Michigan University. Twenty-three of my family members are graduates of NMU. I served on NMU’s Board of Trustees.

MCPP: What’s your outlook on life?

Holman: I’ve always believed in partnering and providing value for people. I was the first person in the U.P. to have a SCUBA dive shop. I enjoyed diving, and had to find a way to support my hobby and also pay for school. Since there was not a big interest in diving, I created my own market and introduced people to the activity. I would take people out on dives to give them a taste for it, and then they got hooked. The shop was in Marquette. I called it the Lake Superior Skin Diving Company.

Whenever I’ve had to fill out a form that asked what my occupation was, I would always write “entrepreneur.”  My dad was a dentist in Ishpeming and at first looked down on all of my ideas. He thought that if you weren’t working, you weren’t making money. But I found ways of working smarter and harder. {laughs} My dad finally warmed up to my ideas when I became successful. I stayed close to home as a kid and adopted a deep conviction for family values and principles.

MCPP: Tell us about your family.

Holman: My wife Martine and I met in the U.P. in 1965. She is from Paris, France. We celebrate 48 years of marriage this year. She didn’t speak English and I didn’t speak French, but we both had taken Spanish, so we spoke that at first.

I have three sons: Scott, Max and Jason. I also have nine grandchildren. I’ve instilled the value of hard work into all of them.

My sons would work around the BayCast facility in Bay City when they were young. They would mow the lawn and do other small tasks. They never complained. They wanted to work. I never pushed them to follow in my footsteps, but they wanted to.

I eventually sold the business to them. I did not give it to them, mind you. I sold it to them. They did their homework, too. They made sure that the price they paid for it made sense. That made me proud. They’re common-sense smart and business smart. After I sold it to them, I got out of their way and they’re doing a great job.

MCPP: How did you end up owning BayCast?

Holman: That’s a great question and there’s a great story that goes with it. Would you believe that I never borrowed a penny from the bank or from a private investor for that? I couldn’t. Nobody believed I could turn around the former Bay City Foundry that had been in the red for quite a while. But that created an opportunity for me. After being turned down initially, I offered $148,000 to finish the work that was already in process, acquire the raw materials, and the equipment to do the job. They rest, as they say, is history. That story helped me become Inc. Magazine’s Turnaround Entrepreneur Award winner for 1991.

MCPP: What value do you find in the Mackinac Center?

I remember in 2008 when a Mackinac Center intern discovered the Reform Michigan Government Now ballot proposal that would have hijacked the Michigan Constitution to favor one political party.

MCPP: Why have you stayed in Michigan?

Holman: I’ve been all over the world. I’ve spoken in Russia to business leaders. I took down a piece of the Berlin wall with a hammer and chisel. I’ve had many wonderful experiences across the globe, but nothing compares to Michigan. Its natural resources and beauty is in a class by itself. There’s nowhere in the world I’d rather be.