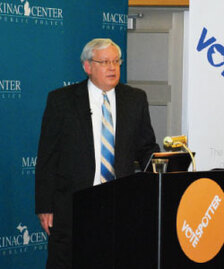 A capacity crowd — including several members and employees of the Michigan Public Service Commission and legislators — helped kick off the Center’s 2014 event schedule at an Issues & Ideas forum Jan. 22 that discussed electricity competition.

The speaker, Dr. Ted Bolema, explained that since the state returned the monopoly on electricity sales in 2008 to Consumers Energy and DTE Energy, Michigan has had the highest electricity rates in the Great Lakes Region and the highest in the country for any state that gets more than half its energy from coal. 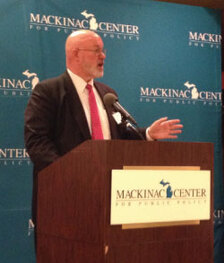 Only about 10,000 customers in Michigan now have the option to switch suppliers, and another 12,000 are on a waiting list. Bolema, an adjunct scholar at the Mackinac Center, dismissed several myths about energy choice during his talk, explaining that states that have introduced more choice have seen rates go down.

The Center also hosted a celebration during National School Choice Week at the end of January that featured a screening of the short documentary “The Ticket: The Many Faces of School Choice.” Panelists included Bob Bowdon, producer of “The Ticket;” Clark Durant, co-founder of Cornerstone Schools; and J.C. Huizenga, a Mackinac Center board member and founder of National Heritage Academies. The discussion included the benefits of different, emerging models of education options, including charter public schools, vouchers and online learning.

A recent study by Audrey Spalding, director of education policy, found that about 100,000 students participate in the state’s Schools of Choice program, which allows them to attend a school in a district other than the one government has assigned them to. Participation has increased 144 percent in the last decade and students generally attend a school with higher test scores and higher graduation rates than the one they left.

The Center closed out its 2013 event calendar with an Issues & Ideas forum focusing on a study co-authored by Executive Vice President Michael J. Reitz dealing with criminal intent in Michigan law.

Reitz suggested that the Legislature adopt a provision that would apply to all statutes that fail to clearly define the criminal intent required for a misdemeanor or felony conviction.

“Conviction of a crime traditionally requires a combination of a wrongful act and criminal intent,” Reitz explained. “But more and more Congress and state legislatures are using the criminal code for regulatory purposes.”

Reitz noted that public welfare offenses — which generally govern behavior — are commonly covered by statutes that do not have intent provisions.

Just one example: in some instances it is illegal for a person or a corporation to buy or sell a new or used vehicle on Sunday.