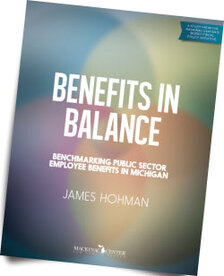 Michigan’s economy is finally recovering after a recession that lasted nearly a decade and the Great Recession stacked on top of that. It wasn’t just the state’s job situation that’s been drastically changed. Michigan’s government workforce has changed a lot, too. Unfortunately, it’s developed a problem with benefits compensation that is unaffordable in the long run. Fixing this problem can save Michigan’s governments and its taxpayers billions.

It’s not salary that’s to blame; it’s benefits. While the costs for salary have kept pace with inflation, the cost of benefits increased substantially.

Meanwhile, the private sector faced the same cost drivers as the public sector — higher premiums for health insurance and more demands for retirement contributions being some of the key drivers. Private-sector employers have met the challenge by implementing consumer-driven health care plans and transitioning from underfunded pension systems to defined-contribution retirement systems.

Bringing benefits in Michigan’s state and local government workforce in line with private-sector averages can save the state $5.8 billion.

Michigan policymakers have already done some things to try to bring benefits in line with private-sector averages. Perhaps the most substantial was passing the 80-20 law, which requires Michigan’s subsidiary governments to require that employees share at least 20 percent of their health insurance premium or cap employer costs for employee health insurance at rates roughly equivalent to private-sector costs. This law will take a while to implement as Michigan’s largely unionized public sector’s collective bargaining agreements expire.

The state also incentivized schools and local governments to approach this issue themselves. The state offered boosts in revenue-sharing to local governments and state aid to schools that start to benchmark retirement and insurance benefits to the private-sector.

The study highlights some more options for legislators to tap into savings. One of the major ways to tap into these savings is to close the school retirement plan and offer new employees a defined-contribution retirement plan. The state has already become a national model by closing its state employee system in 1996 and should do the same here.

Even though each level of government is different, they are all experiencing problems in the costs of employee benefits. Instead of attempting to mandate and benchmark selective benefits by statute, a constitutional proposal that requires private-sector benchmarking would ensure that the issue gets resolved.

It would also do a lot to slow the government cost spiral that’s been demanding more and more taxpayer resources to cover the same level of government.